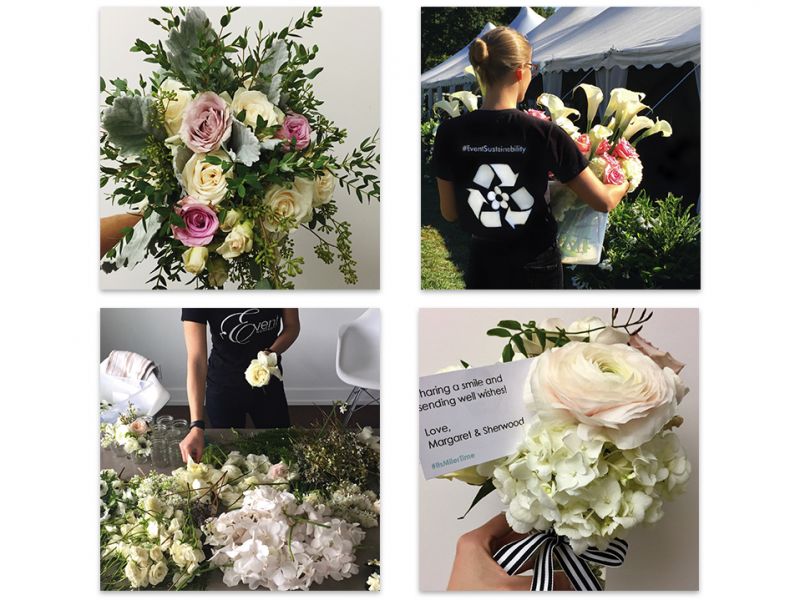 Sarah Bella Slagsvol and rEvent volunteers gather flowers from weddings and events; rearrange them into “bedside bouquets”; and deliver them to hospitals, shelters, and more.

While memories of newlyweds’ “I dos” last a lifetime, most Big Day trappings are designed for one-time use. That white gown will likely be tucked into the back of a closet. Despite being plastic-wrapped and frozen, the crowning layer from that cake won’t taste so top-tier a year from now. And no matter how carefully chosen their frocks, your bridesmaids aren’t likely to slip into them for any future affairs. But one College of Charleston graduate has vowed to broaden some of that wedding-day bliss beyond a three-hour reception.

As associate events coordinator for ELLE, Sarah Bella Slagsvol witnessed plenty of post-party throwaways. “I wanted to find a way to minimize waste and maximize local reuse,” explains Slagsvol, who said farewell to the Big Apple in 2015 to pursue a sustainable event solution down in her home state. Launched early last year, rEvent extends the life of wedding and event flowers, as well as linens, vases, candles, and the like, by sharing them with hospitals, veterans medical centers, assisted living facilities, shelters, arts programs, and more. Couples or coordinators can easily arrange the pick-up of their tax-deductible donations online at revent.events. Then, with the help of volunteers, Slagsvol collects gifted blooms and nonperishable décor directly from the venue as soon as an affair has wrapped.

The stems are edited and given a fresh cut, reassembled as “bedside bouquets” in jars tied with ribbons and a note from the donors, then delivered—sometimes personally by the rEvent team—to recipients at the donor’s elected charitable organization. “The arrangements from an average-size wedding can create 100 smaller bouquets,” says Slagsvol. “When treated well, they will last up to a week or more.”

In addition to weddings, rEvent has been invited to repurpose the trimmings of fundraising galas, corporate receptions, and civic affairs. In its debut, the group recycled flowers from Mayor John Tecklenburg’s inauguration, delivering them to MUSC. Last winter, firs from a debutante ball were distributed via Neighborhood House to families who couldn’t afford a Christmas tree. And Slagsvol has also been able to say yes to requests for out-of-state donations, including those from the 2017 Democratic National Convention in Philadelphia and three ELLE events.

“We’ve picked up a lot of speed,” enthuses Slagsvol, who has outfitted volunteers in Los Angeles; Washington, D.C.; and New York with rEvent repurposing kits containing flower-transport bins, T-shirts, ribbon, and tags. “I hope to continue expanding our reach across the country,” she says.