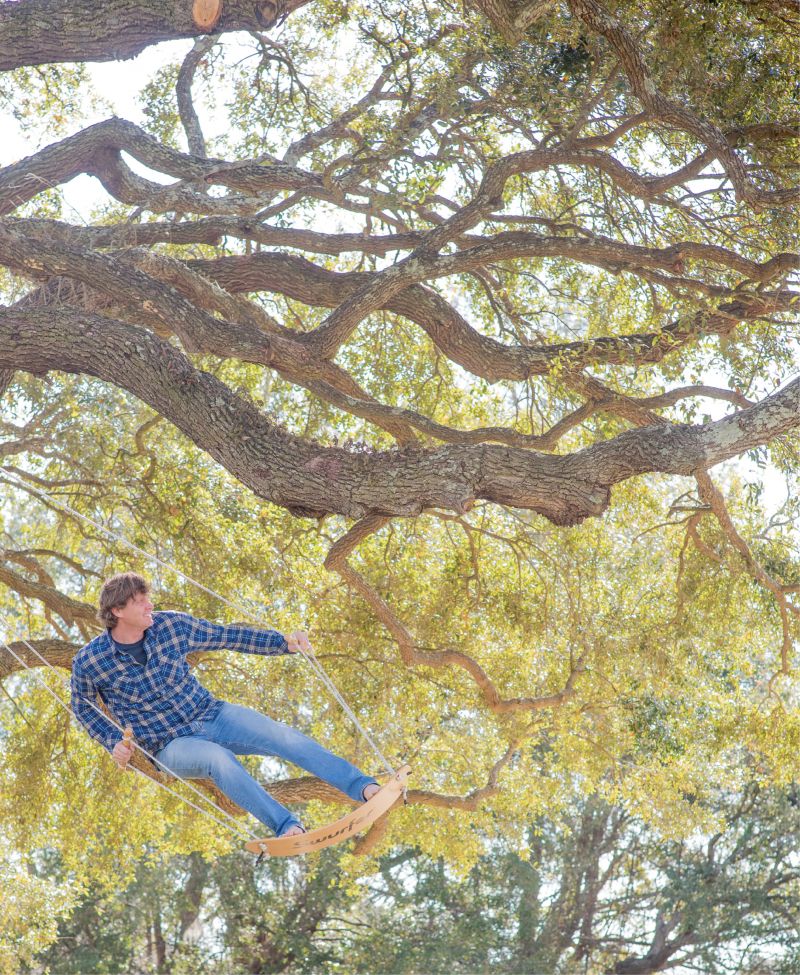 These days, you see them slung over tree limbs all around town—the surfboard-swing hybrid dubbed ”Swurfer” that Rob Bertschy created and launched into local ubiquity, and international success, in three short years. Swurfers are now in 1,000 stores in the United States, plus about 15 shops each in Canada and Europe. But the company still operates out of a James Island warehouse that looks like Tony Hawk’s playroom: graffiti mural, neon beer signs, a slack line, and Swurfers everywhere.

CM: Tell us about introducing Swurfer with a cross-country road trip in 2014.
RB:
We sold our house and bought a 1981 bus to take on the road. We pulled the kids out of school a month early and went across the country going door to door. We woke up in the most amazing places—like the Grand Tetons and near one of the big arches in Arches National Park.

CM: How involved are the kids in your company?
RB:
There are two things I can give Royce and Owen: true, rich experiences and an education. On that trip, they got crazy experience and learned what it takes—the good and bad—to start a business. They’re as much a part of this as I am.

CM: What’s the most surprising spot you’ve seen a Swurfer?
RB:
Hanging from a boom on a tuna fishing boat out at sea. When the fish aren’t biting, Swurfing is a great way to pass the time!

CM: Is it hard be 100-percent American-made?
RB:
No, we have a pretty simple product—it’s wood and rope. We live close to the furniture capital of the world, High Point, and by the ocean, where rope suppliers make marine-quality rigging. With four of us on staff, we cut everything and package and ship out of the warehouse.

CM: What’s next for Swurfer?
RB:
We just got into REI—all their stores in markets with trees!

CM: Are your children still into the swing?
RB:
They Swurf all the time. I get on it, too! What’s that guy’s name...Ryan? The actor all the girls like? Ryan Gosling! He swears by it. He says the only reason he looks that way is because he Swurfs every day. No, I’m kidding. But it is addicting and a great workout.