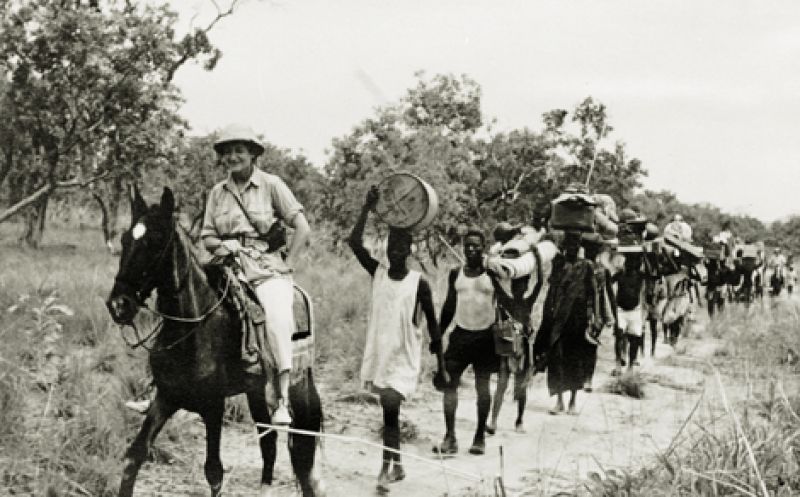 he Lowcountry’s lures are many; some love the land and water; others prefer the aristocratic city. Perhaps no one combined the two lifestyles better than Gertrude Sanford Legendre. Though an acclaimed hostess (an invitation to her fêtes proved your social success), she gained more fame as an outdoorswoman who roamed the world seeking adventure—and always finding it.

Born into great wealth at her family’s Aiken residence in 1902, Gertie, as she was called, grew up among athletes—her brother Laddie rated as one of the best polo players in the country. She was horseback riding with her new husband, Sidney Legendre, in 1929 when they came upon Medway Plantation in Berkeley County. They purchased it, restored the circa-1705 main house, and bought neighboring land to form a 6,700-acre estate. Here they hunted, entertained, and raised two daughters.

But the world was constantly calling to Gertie. In 1927, she and Laddie had gone off to East Africa, where she killed her first lion. Two years later, she financed an expedition to Ethiopia to gather specimens for the American Museum of Natural History. The Legendres went next to French Indochina (now Vietnam, Cambodia, and Laos) to find more exotic creatures for the museum’s collection. In love with places off the map, they came across Laos’ megalithic Plain of Jars, and their photographs remain some of the earliest known images of it. Sidney documented their adventures in his 1936 book, The Land of the White Parasol (being republished this fall by DatASIA), highlighting his wife’s bravery and drive.

The pair’s wanderlust was inexhaustible. In 1936, they took a brutal three-month expedition through Southwest Africa, this time for the Philadelphia Academy of Natural Sciences. “When we weren’t dripping under the tent flies, we were getting stuck in ant bear holes as big as subway tunnels,” Gertie later wrote. Undaunted, she next financed a museum expedition to Iran.

When World War II erupted, Sidney signed up while Gertie volunteered, eventually being placed with the Office of Strategic Services, the forerunner of the CIA. She garnered world headlines when she was captured in France and imprisoned by the Nazis. Yet she escaped after six months and later helped resettle one of her guards in the Lowcountry. Two years after the war, Sidney and Gertie were in India, collecting birds and mammals for the Peabody Museum of Natural History.

Despite Sidney’s death in 1947, Gertie kept traveling, visiting Nepal for the Peabody and financing an expedition to French Equatorial Africa under the aegis of the National Geographic Society. But she always returned to Medway. Before her death in 2000, she had the land protected with conservation easements so that no matter who bought it, it would always be wild and untamed, a bit like Gertie herself.