West Ashley: Backyard sanctuary from "rescue plants"
September 2008
Rescued from trash heaps and handed down from friends, plants of all provenance are right at home in Jane Ries’ West Ashley garden 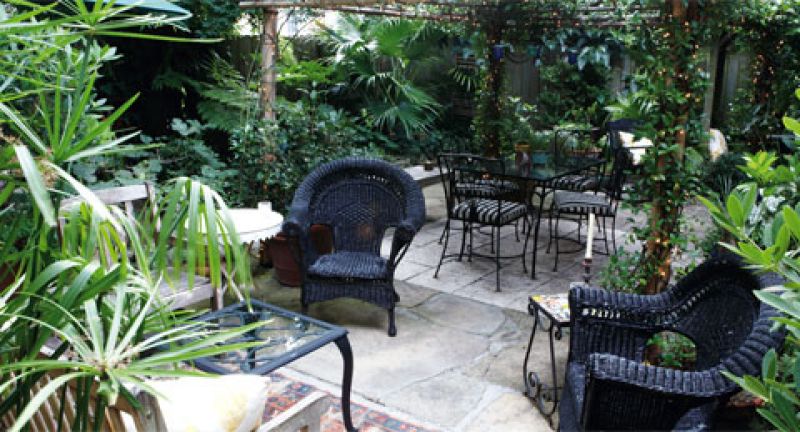 “I am traditional and conventional in many ways, yet ‘out there’ in others,” says Jane Ries, gazing out across the backyard of her West Ashley cottage. “I think some people are surprised when they see my garden. It’s uncommon, but at the same time, it looks like something you might see in town.” And Ries should know: a real estate agent with Historic Charleston Properties, she’s made it her business to know Lowcountry houses both inside and out. Still, her passion for gardening didn’t fully bloom until she faced a significant challenge in her own outdoor space. “I was renting a kitchen house South of Broad. It had a formal Charleston garden that had gone to seed because the owner didn’t care much about keeping it up. Transforming that space really got me interested in gardening,” she explains. Six years later, her interest was piqued again as she honed in on the small backyard of a quaint West Ashley cottage she purchased. “This one was all dirt—it was rather depressing—and had suffered years of neglect by transient renters. It had a concrete slab and a mysterious tree with curvy limbs and hard green fruit,” she recalls. “But I looked at the space as potential for something that could be really fun and cozy.” While Ries may not have begun the project with a checklist of wishes and requirements, she did have a clear view of what wouldn’t be on the drawing board. “I didn’t want it to feel like one big rectangle, so I tried to divide it up,” says Ries, who has long favored lush gardens over manicured spaces. “I don’t like a rigid, trimmed look, so I started around the edges and just let the garden creep in. This made dividing up the spaces a more natural process.” The ensuing “rooms” made the garden feel like an extension of the house. “I definitely use it that way,” she laughs. From there, plants were added spontaneously. “I’m kind of a scavenger, so if I see anything out in somebody’s trash, I bring it home and try to make it grow. Plus, everyone knows that I love plants, so they share their cuttings,” she says. Appropriately enough, a fig tree given to Ries by a friend was the first planting in her mostly DIY garden. Edges of elaeagnus followed, along with a bamboo gazebo that’s now covered in jasmine, one of numerous creative contributions from friend Robert Thelen. Then came the roses; various herbs including lemon grass, rosemary, and anise; and a “sidewalk wall,” dreamed up and installed by Thelen. Composed of broken pieces of sidewalk, the enclosure is used to contain shade-loving plantings like ferns and fatsia. Along the way, palms, gardenias, tea olives, a Meyer lemon tree, and evergreen wisteria have also found their own niches here. Ries points to the night-blooming cereus, a flowering nocturnal cactus, as a standout among her arbitrary plantings. “It’s rather primitive looking but it’s probably one of my favorite elements in the garden,” she says of the shy plant handed down to her after its previous owner had seen only one bloom in five years of tending the plant. While most night-blooming cereus’ have one or two blooms annually, Ries’ has already bloomed 23 times this year. The philosophy behind Ries’ garden is simple: it’s an evolution. “I’ll collect anything that anybody wants to give me. I just keep adding to it, and somehow it all works out,” she says. And although at first sight Ries’ avant garde space might seem to buck local horticultural tradition, it’s not without a few nods to place. “The influence of Charleston gardens is apparent in the hardscape—there’s an intimate, walled courtyard feeling, with big Asian inspired pots and elements like fig vine that are reminiscent of downtown,” says Ries. “But I get inspiration from everything I see. Sometimes I think I’ve never had an original idea in my life,” she laughs. Now that the back garden is nearly filled to bursting with all manner of tropical plantings, Ries has turned her attention to the front yard. Envisioning an alfresco gallery of sorts, she has already installed a free-form bronze work by artist Tom Durham. As her new project shows, one of the hallmarks of Ries’ style is its variability. “My goal is really just to make things look better than they did in the beginning,” she says, though she’s not quite ready to declare her garden a success. “Whether or not it’s more attractive than it was before, it’s definitely different.”

Horticultural Recycling 101
Looking to make your own roadside rescues? Ries offers these tips for filling your landscapes with other people’s leftover plants 1. “Be prepared,” suggests Ries. Keep clippers and a big piece of plastic in your car at all times. “This will cut down on the mess in your car.” 2. “Eyeball them,” she says. If the plant is still green, chances are, it can recover. 3. Make sure the plant’s root system is intact and still in soil. “It’s even better if the plant is thrown out in its pot,” says Ries. 4. Don’t rule out dry soil. Even a parched plant can be salvaged. 5. Beware of plants with vines or weeds attached. The uninvited guests will be introduced into your garden upon planting. 6. Look for well-established plants. Mature greens have a good chance of survival. “Sometimes when neighbors are redesigning their landscape, well-established plants are dug up and put roadside,” notes Ries. 7. Keep your eyes open for palms and ferns. “They can get down to the nub and still come back,” says Ries. Vines like Confederate jasmine and bougainvillea are also high on the list of plants receptive to transplantation, but orchids are among those Ries will pass on. “They probably will not bloom again no matter how well you take care of them,” she offers. After getting your salvaged plants to their new abode, place them in an appropriately sized pot with soil and compost or an organic fertilizer, which is less harsh than conventional varieties. From there, Ries’ advice is simple: “Give them a good home.”