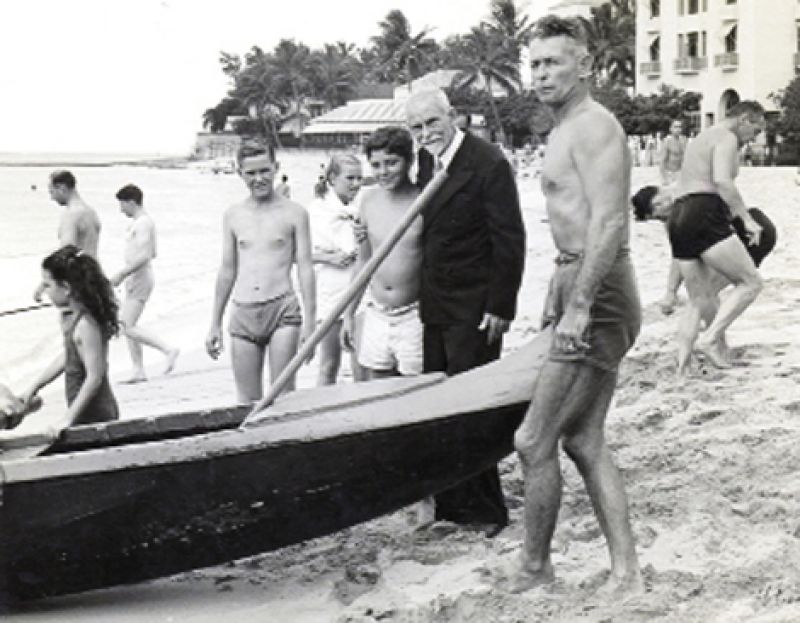 In 1886, an 18-year-old left Charleston to see what impact he could have on the larger world. In the coming years, diplomats and historians would register the effects of this young man—Alexander Hume Ford—but his greatest gift would be to devotees of a sport practiced around the globe, from the Washout on Folly Beach to the shores of Hawaii’s Waikiki.


Ford, born April 3, 1868, in Florence, SC, was descended from prestigious Lowcountry families. Orphaned by 1872, he attended Porter Military Academy (now Porter-Gaud), where he swam and opened his mind under the influence of Rev. Anthony Toomer Porter. He served a short stint on staff at The News and Courier, and upon graduation (and after the great earthquake of 1886), he left, aiming for America’s big cities. In New York and Chicago, Ford worked as a freelance writer and playwright before his wanderlust took him to Japan, Russia, and China for some eight years.


In 1907, the traveller landed in Hawaii, arriving just as the local sport of surf riding was dying off. But Ford took it up, and after much study, he could be found on local beaches showing natives and travelers the glory of standing on a wooden board as king of the sea. Author Jack London was visiting the island with his wife, Charmian, when Ford introduced the couple to the sport and also to its great athlete, George Freeth.


London, a zealous surfing convert, penned “A Royal Sport: Surfing in Waikiki” to encourage others to take it up. The piece—published in Ladies Home Companion in 1907—caught the popular imagination. Freeth was invited to California to put on a public exhibition of the sport, which immediately took root on the West Coast. For his part, Ford stayed in Hawaii and petitioned to set aside a plot of Waikiki beach to ensure a perpetual home—and future—for surfing; to that end, on May 1, 1908, the now-famous (and still-thriving) Outrigger Canoe Club was founded.


Riding the crest of that success, Ford took on larger tasks. He dedicated himself to interracial cooperation in the West, creating the Pan Pacific Union to accentuate the region’s culture and bring all nations on the Pacific’s shores into close commercial contact and peaceful relations.


The impact of this and his other endeavors wasn’t realized until after his death in 1945. Ultimately, Hawaii achieved statehood; the post-WWII globe benefited from the solidarity of the Pacific Rim region; and surfers from Waikiki to Charleston are still riding wave after wave.