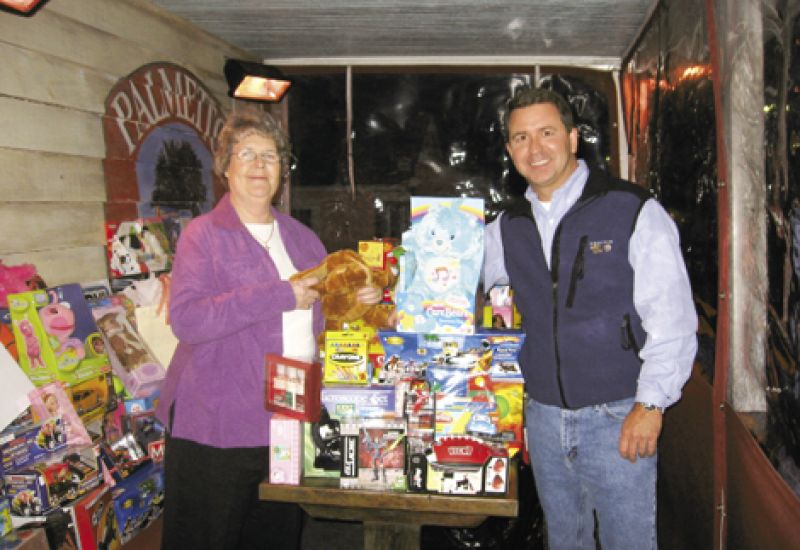 In 2004, local banker Jeff Spicer sent an e-mail to friends inviting them to a holiday happy hour at Poe’s. “I casually suggested they bring a toy that we could donate to a worthy cause,” he says. “When the night came, I was floored by the response—friends invited friends, and everyone brought gifts. They talked about how much fun they’d had shopping for children they didn’t even know.” Spicer decided then and there that the event would be annual.

After another jolly turnout in 2005, Spicer partnered with The Dee Norton Lowcountry Children’s Center (DNLCC), making the young victims of abuse whom it serves the sole beneficiaries of his Gathering of the Elves. “We’ve held a toy drive for more than 10 years for kids whose families can’t afford gifts,” says DNLCC marketing and volunteer coordinator Caroline Smith. “But this event helps us gather a lot of goods at once while also raising awareness for the center.”

By 2009, the present party had grown so large that Spicer and his new bride, Tara, moved it to Taco Boy downtown. Some 250 people attend each year, bringing an unwrapped toy, gift certificate, or $10 donation. “We use the money and gift certificates to buy items from the kids’ wish lists,” explains Smith. “We not only give to the child who’s receiving services from the center but also to his or her siblings. And what’s unique is that we deliver the presents unwrapped. This allows caregivers to see what they’re giving and feel more like the gift is from them.”

While Spicer retired as head elf this season, you’ll still find him joining in the merry-making on December 1. Pick up a present and head over to Taco Boy for drink specials, door prizes (last year’s included a Wii and a night at Charleston Place), and plenty of holiday cheer. Miss the event? You can donate to DNLCC all the way up through Christmas.

Since 2004, some 1,100 kids seen at The Dee Norton Lowcountry Children’s Center and their families have received toys thanks to Gathering of the Elves.