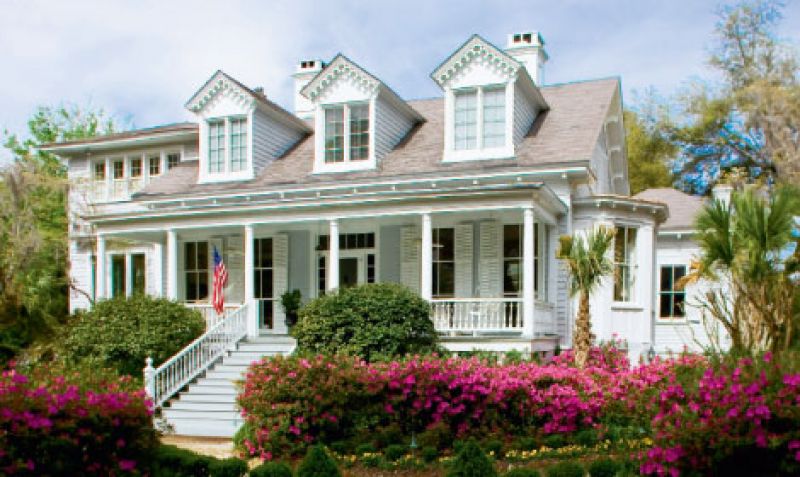 A suburban, lesser known cousin of the famed Drayton Hall and Magnolia Plantation estates, Summerville’s Linwood Inn is the easygoing young charmer of the Drayton clan’s holdings. William Hastie and his wife, Julia Drayton, built the house in 1883 on a plum site—nearly two acres in the center of town—one block from the Summerville train station. For Mr. Hastie, it was an easy commute to work; the first American-made, passenger-carrying steam locomotive (dubbed the “Best Friend of Charleston”) carted him into the Holy City daily and home in the evenings. Meanwhile, Julia’s father, the Reverend John Grimke Drayton, patriarch of Magnolia Plantation, lived out the latter years of his life at Linwood and died there in 1891. The tin-roofed house was built as a two-story clapboard Victorian boasting a central hall plan with a kitchen located in the basement. (Food was brought up to the dining room via a dumbwaiter.) Heart-of-pine floors, triple-sash windows, and period window bays in the downstairs receiving rooms are all original elements. Remarkably, the Hasties’ newly constructed home remained relatively intact when the 1886 earthquake shook Summerville, though the damage it sustained remains a source of interest to seismologists. Glass from bay windows on either end of the house fell in opposite directions, and supporting piers showed curious circular damage, leading some scientists to speculate that the fault line ran underneath the home. A rendering of the structure, along with details of its damage, are included in the 1887-88 U.S. Geological Survey. The Hasties remained at Linwood until 1901, when they took up residence at Magnolia Plantation, making Julia the first woman in the region with a kitchen inside her house. Meanwhile, Linwood spent the better part of the 20th century as a single-family home, though it did undergo some changes. Open-air sleeping porches were probably added around the turn of the century, as Summerville was considered one of the top two locations in the world to recover from tuberculosis. (Most believed that breathing air filtered through the Summerville pines was beneficial to the lungs.) Today, these porches are enclosed sunrooms. A small parcel of land was sold off in the early 1900s, and with it, the carriage house and stable; in the 1920s, an owner built a cottage-style guest house on the back of the property. The current owners, Linda and Peter Shelbourne, bought the property in 1979 before opening a bed and breakfast there 15 years later. The couple has restored the gardens, even adding camellias and azaleas named for the previous owners. Among them? A Camellia japonica dedicated to Reverend John Grimke Drayton.

1883: Julia Drayton and William Hastie build their home on two acres in the heart of Summerville. 1886: The house survives the legendary Charleston earthquake with mild damage. 1901: The Hasties move to Magnolia Plantation and sell their home to the Prettyman family. 1920s: A cottage-style guest house is built on the back of the lot. 1979: Linda and Peter Shelbourne purchase the property for $135,000. 1994: The Shelbournes transform Linwood into a B&B. 2007: A hay barn is renovated into guest quarters.