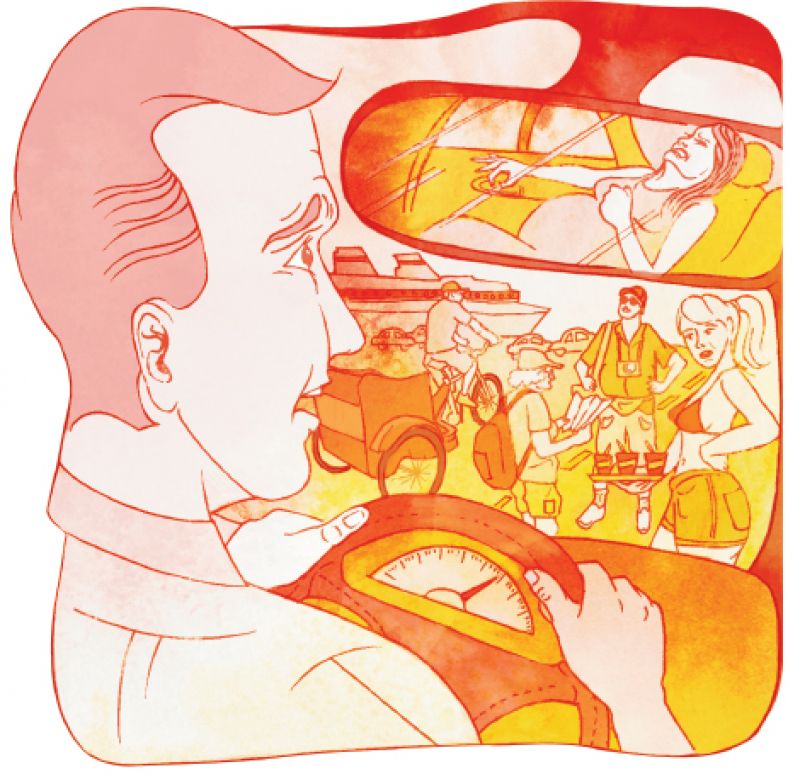 Gather, friends, and I’ll tell you a frightening tale of our fair city, a hellish story meant only for the ears of adults. To even whisper it to our babes would yield flight across our borders for generations to come.

The tale begins on Church Street on a fine day in May as harbor breezes blow a bouquet of honeysuckle and jasmine. Then, the tranquility is shattered by a scream: “Rutledge! Ruuuutledge! It’s time!!”

Moments later, a frantic man and his very pregnant wife pile into their SUV and back down their drive, when another scream erupts. “Hey, jerk! You almost ran over my wife.”

Rutledge springs from his car to see a well-fed retiree with a crimson face to match his fanny pack. “We’re just checkin’ out the frickin’ garden, and you almost kill us.”

Twelve minutes later, the SUV turns onto South Battery and blasts through the stop sign on East Bay. The vehicle reaches almost three m.p.h. before pulling behind a horse-drawn carriage laden with a small town from Ohio. The father-to-be pulls around the carriage, only to become trapped by a tourist attempting to parallel park, an exercise quickly dissolving into a 112-point turn.
Ticktock.

It’s early afternoon when he untangles himself from the gridlock. He is moving ahead at idle speed when his car is assaulted by a woman in a string bikini who demands he try a sample of Italian ice. The man looks at his pregnant wife and back to bikini girl. “A scoop of lemon in a cup. Do you take credit cards?”

Yet another vendor careens up, selling two hot dogs, a coke, and a bag of chips for $5. When the man pulls away an hour later, he’s eaten lunch and now possesses 17 roses crafted from palmetto fronds, a coupon for a free harbor cruise, and a cup of watery lemonade. Perhaps now, he’ll make up some time.

At East Bay and Cumberland, he encounters something that his mind can grasp only as some sort of a Train-Car Transformer—tens of thousands of vehicles coupled one inch apart, all turning left in front of him.

“What’s going on??!!” he shouts to a nearby policeman.

“My wife is delivering! Can you make me a break in the line?”

“No, sorry. Those people are spending dozens of dollars here.”

Taking an unthinkable risk, the man boldly turns north on Meeting. A trolley is taking up both lanes, but a window of freedom beckons to the right where parking is reserved for deliveries. His foot moves to the accelerator just as a truck glides into his escape route, puts on its flashers, and shudders to a stop.
* * * *
Fast-forward to July, and the man, his wife, and their two-month-old twins are creeping past Roper. “Turn the car around, Rutledge,” the woman says. “Right now.”

“Don’t you think we should at least get the twins their check up?”

“We’ve only got six weeks to get them to their baptism at the Cathedral. Head south!”