Spellbinding Spirits
October 2012
Here are some wines that are downright thrilling! Pour for friends and family at a spooky Halloween bash 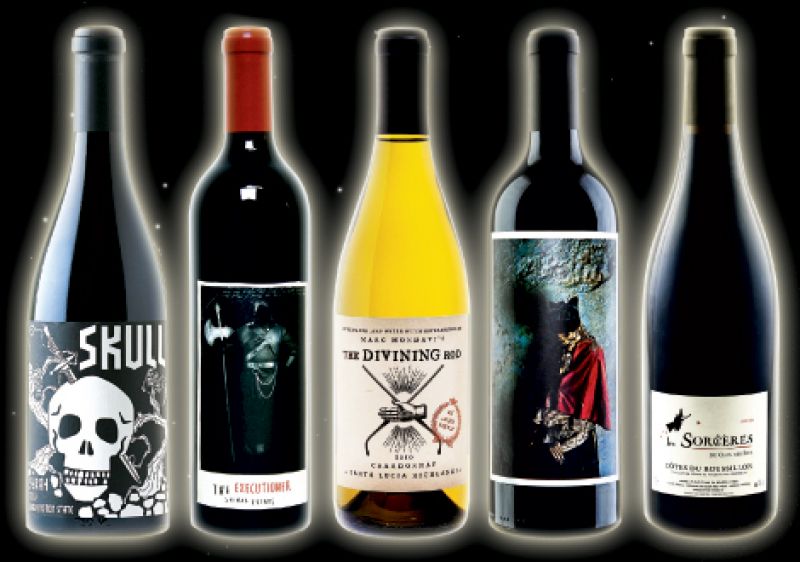 Charles Smith Wines “Skull” Syrah 2007 (Columbia Valley, Washington), $120: Bold winemaker Charles Smith has done it again with his Skull Syrah, creating a wine that is intense and meant to age. The almost black juice has flavors of truffle, spicy incense, and blueberry, along with round tannins and fruit coming from a single site, Stoneridge Vineyard.

Shinas Estate “The Executioner” Red Wine 2008 (Victoria, Australia), $28: This monster of a wine is made from shiraz, cabernet sauvignon, and viognier and is the Shinas Estate’s flagship blend. Flavors of black currant, cherry, and tobacco linger on the palate along with a spicy and strong mouthfeel. It is a wine to die for!

The Divining Rod Chardonnay 2010 (Santa Lucia Highlands, California), $20: Sometimes witches’ potions come in the form of wines such as this chardonnay made by a real “water witch,” or one who is skilled at locating sources of water deep underground. Pineapple, creamy lemon curd, and citrus fruit flavors, along with a bright acidity, make this wine almost supernatural.

Orin Swift “Palermo” Red Wine 2010 (Napa Valley, California), $32: Don’t let the image of a crypt on this label (captured by photographer Vincent Musi, whose work can be found in National Geographic) scare you away. This blend of cabernet sauvignon, merlot, and cabernet franc aged in French oak fills the palate with cherry and fig flavors rounded out with a soft tannin finish.

Domaine du Clos des Fees “Les Sorcieres” 2010 (Cotes du Roussillon, France), $20: The winemaker of this syrah/grenache blend is known as the “wizard of the Roussillon” in France. Fairies and witches figure prominently in the naming of Domaine du Clos de Fees varieties and Les Sorceres is no exception. This aptly titled wine has a bright nature and delicate tannins.