Sea Oats
May 2015
WRITER:
Suzannah Smith Miles
The early 18th-century British explorer Mark Catesby called this tall, slender perennial grass the “sea-side oat,” observing that it was found “on sand hills; so near the sea, that at high tides the water flows to it.” Thriving in salty environs, Uniola paniculata is integral to beach ecosystems for its role in holding together dunes—and those deceptively gentle-looking hills of soft sand are vital for blocking wind and absorbing the impact of high, storm-driven seas 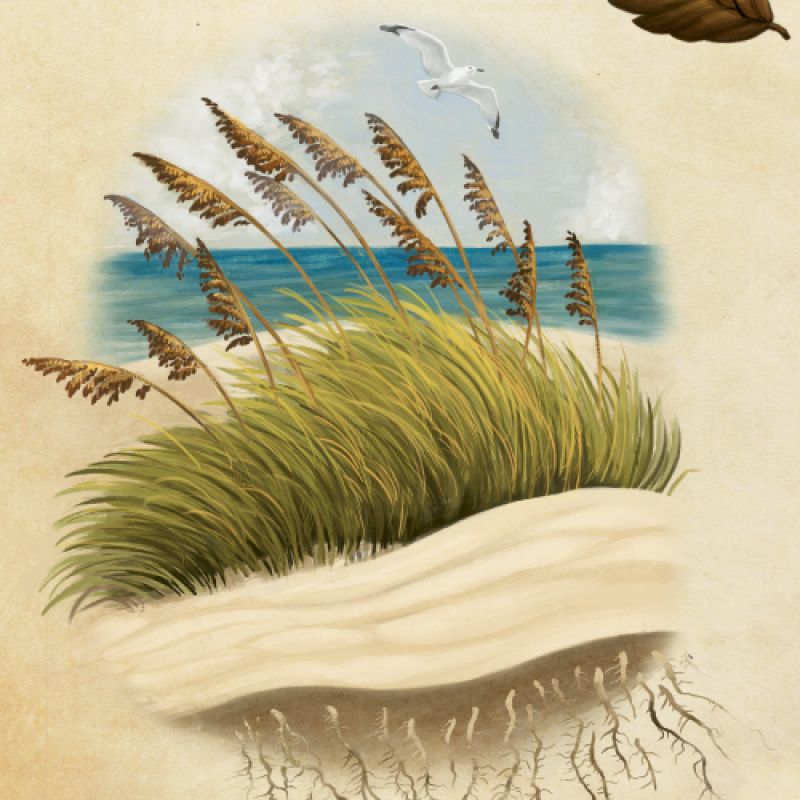 Law of Nature
Along with other sand-binding grasses, sea oats are so important to dune formation and stabilization that it is against the law in South Carolina—and many states along the Southeastern coast—to pick them. Even walking in dunes can cause damage, disrupting roots and compacting sand.

Quite a Catch
The long-living, slow-growing perennial reaches up to six feet tall, with thin, 24-inch-long leaves that snag blowing sand, feeding dune growth. In fact, the burial of the plant’s base by fresh sediment encourages its growth and helps it spread.

Damage Control
Sea oat populations are dwindling due to habitat loss and coastal development—sewage, urban runoff, and pollution from marinas all affect the plants.

For the Birds
In summer, this subtropical grass produces oat-like blooms called “panicles” that ripen to golden-yellow late in the season. Each panicle is composed of flat spikelets storing seeds that provide food for red-winged blackbirds, sparrows, wrens,
and other creatures such as rabbits and mice.

Root of the Matter
A healthy stand of sea oats forms a complex root system that not only extends deep into the ground, but spreads out horizontally in a “rhizome system.” The roots of one six-inch-tall plant can extend as far as five feet below the surface, creating a mesh-like base that stabilizes the sand.