“Return to the Sea: Saltworks”

“Return to the Sea: Saltworks”
May 2012
Artist Motoi Yamamoto translates salt—a purification symbol in Japanese culture—into a transcendent installation at the Halsey Institute of Contemporary Art 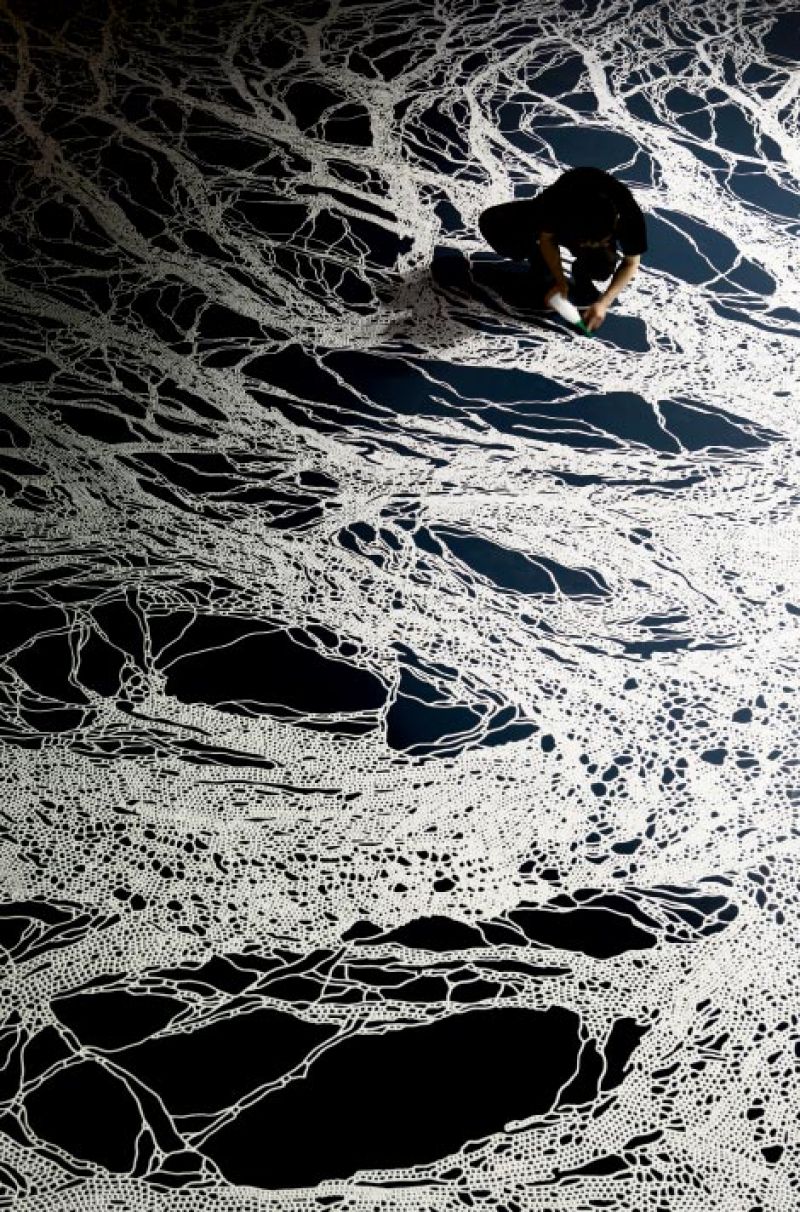 Labyrinths can instigate a journey, leading movement to a specific end. For artist Motoi Yamamoto, his elaborate labyrinths, formed from salt, began in 1994 as a means to grieve his sister’s death from brain cancer at age 24. (In Japanese culture, salt is used symbolically for healing, good fortune, warding off evil, and in funeral rites.) For the past 20 years, Yamamoto has taken the common compound and created time-consuming, awe-inspiring, site-specific installations around the world. “Each grain of salt contains its own history and trajectory,” says Halsey Institute director and curator Mark Sloan. “Something so seemingly common becomes a metaphor for the evanescence and transience of human life.”

For his works, Yamamoto enters a meditative state, methodically forming the piece. In the beginning, his labyrinths had just one entry and exit point but have evolved over time into various forms. These days, the artist says he lays down the lines more intuitively, describing the process as “following a trace of my memory.”

Join Yamamoto this month as he returns to the Halsey—he participated in the 2006 “Forces of Nature” group show—to cover the 2,300-square-foot gallery floor in a mesmerizing tableaux. He says he feels more “mended” now, and the work is about sharing. Similar to the Tibetan sand mandalas, the impermanence of the piece is part of its significance, and at the end of the exhibition, everyone is invited to come and take a bit of salt and “return it to the sea.”

“Return to the Sea: Saltworks”
May 25-July 7, Monday-Saturday, 11 a.m.-4 p.m.
Halsey Institute of Contemporary Art, Cato Center for the Arts at the College of Charleston, 161 Calhoun St. Free.
Artist Residency: Visit the galleries May 14 to 24 to watch Yamamoto create his installation.
Opening Reception: May 24, Thursday, 5-7 p.m.
“Conversations With”: Martha Teichner interviews the artist. May 26, Saturday, 5 p.m. Recital Hall at the Simons Center for the Arts, 54 St. Philip St.
Dismantling Ceremony: July 7, Saturday, 4 p.m.