Philip Simmons
June 2009
WRITER:
Charleston Magazine Staff
PHOTOGRAPHER:
Peter Frank Edwards
More than 600 assemblages of wrought iron—his life’s work—exist in Charleston and beyond. Now, the hunt is on to locate and document each piece and preserve the handcrafted legacy of a beloved man 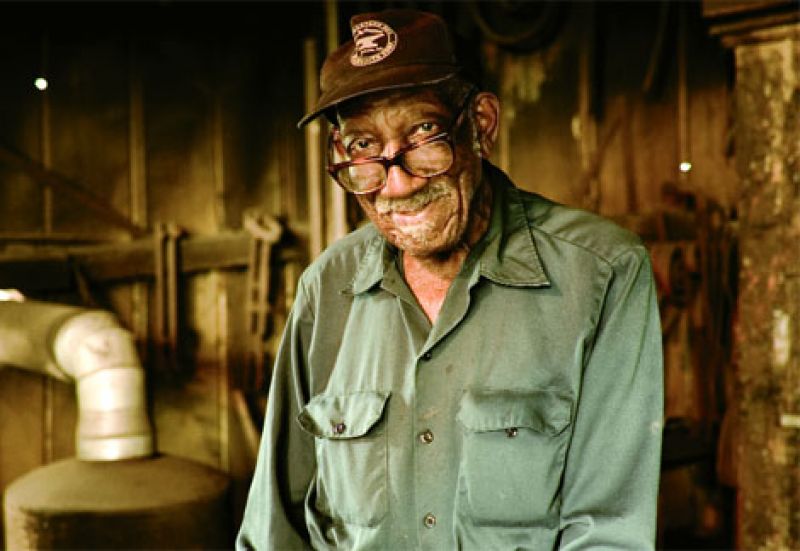 Charleston magazine salutes the life and work of local icon Philip Simmons, who died last night at age 97. We are fortunate to have worked with the renowned blacksmith on many articles, photo shoots, and a video throughout the years and would like to share them with you. Philip Simmons’ legacy will live on.

It’s a cool, clear fall day, with sunlight pouring in like someone took the lid off the world. A perfect day for a drive. A minivan slowly winds through peninsula neighborhoods, pausing in front of homes and driveways, its passengers checking out architectural details and noting the lovely ironwork. But this isn’t your typical Charleston tourist drive-by. This is curatorial cruising. Historical field research. This is four artists and a movie camera, and one big undertaking. Welcome to the Philip Simmons Documentation Project.

“Here, take a left. Yep, turn…here—I know it’s here somewhere,” Mr. Simmons says from the back seat. And sure enough, the van rounds a corner north of Spring Street, and there’s a magnificent iron gate. This one has brass knobs on it, a departure for the purist blacksmith. “I don’t usually work in brass,” says Simmons, “But this lady insisted, and you know, the customer is always right.” Every year or so she’d call him to come over and polish the brass, Simmons explains. And so the living history unfolds, one left turn, one gate, one telling anecdote at a time.

You’d be hard-pressed to find a Charlestonian more beloved than Simmons. He’s the darling of preservationists, the epitome of artistry, the king of craftsmanship, and the hallmark of humility. And besides all that, he’s just plain endearing. Philip Simmons emanates warmth and wisdom as if he soaked it up by the hot forge all these 94 years and the coals are still glowing. Forget Tuesdays with Morrie, just a short time in Simmons’ presence makes the essentials of a good and meaningful life apparent: hard work, faith, integrity, gratitude. He’s earned more accolades than will fit under his anvil, and just when you think he’s received about every recognition possible (Order of the Palmetto, National Heritage Fellowship Award, an honorary doctorate from South Carolina State University, The Elizabeth O’Neill Verner Award, to name a few), Wheel of Fortune comes along and wants their upcoming Charleston show to feature Vanna White in front of a Philip Simmons’ gate. Fitting, perhaps, for someone who started out making wagon wheels.

Yet while Simmons is much celebrated and much adored, his oeuvre is not well-documented, at least not thoroughly. Four books, including two children’s books, and a 20-minute video tell his story, but to date, there isn’t a complete catalogue of his work. When Simmons began crafting ornamental ironwork in 1938, he did so out of necessity, never anticipating notoriety. He made meticulous sketches, some of which still exist, and in later years, as his gates drew more and more acclaim, he began keeping a scrapbook, but it was loaned out years ago and never returned. Nearly eight decades of work—everything from gates to window grills, railings to hinges—is scattered about, mostly concentrated in Charleston. Some pieces, however, have made their way across the country, as homeowners have taken them when they’ve moved. Some have been sold on eBay. And the Philip Simmons Foundation, together with Sunhead Projects, is hot on their trail.

Collaborative Forces
The Philip Simmons Foundation is the primary “keeper of the gates.” Established in 1991 to create a commemorative garden at St. John’s Reformed Episcopal Church, where Simmons has been a lifelong member, the foundation now works to preserve Simmons’ legacy. As project administrator for the foundation, Rossie Colter has developed numerous fundraising opportunities, including a popular “Keeper of the Gate” series, which includes a video, a poster with 20 black-and-white photographs of well-known pieces, and a catalogue from a traveling exhibit of the same name. “The catalogue features 35 images, but that’s only 35 out of potentially 600 pieces,” says Colter.

Initial efforts to document Simmons’ work began around 1995, when the Philip Simmons Foundation and Historic Charleston Foundation received a South Carolina Humanities Foundation grant to fund the research. From 1995 to 1998, Christine Castaneda located and photographed as much of Simmons’ ironwork as possible. “That gave us five volumes of raw information, but we knew we had to go back and do more,” explains Colter. “An address would be notated as ‘window grills,’ but it turns out there would be 14 window grills.”

The enormity of the project was overwhelming, and it sat on the back burner while other endeavors, such as rewiring Simmons’ aging home on Blake Street, creating the Simmons Park at Daniel Island, and planning the Foundation’s special events, kept Colter busy. Yet when Simmons’ longtime friend and artistic collaborator Mary Edna Fraser introduced Colter to local filmmakers Steve Lepre and Mark McKinney, the fire once again was stoked.

Fraser and Simmons began working together in 1989, when both were commissioned to create installations at the Charleston airport. “We understand each other. We both work in tedious art forms that require intense craftsmanship,” says Fraser, a batik artist who also assisted Simmons on the design for the city gates at the Visitor Center and considers him one of her dearest friends. Fraser has also collaborated with Lepre and McKinney on various film projects, and she encouraged them when they expressed an interest in doing a piece on Simmons.

“They have an artistic passion equal to Mr. Simmons’. I knew that they could really capture his essence on film,” Fraser says. After Lepre and McKinney showed Colter their award-winning documentary on homelessness, Who Among Us, she, too, was sold. Colter then shared the thick files of raw, disorganized notes documenting Simmons’ work to date—when Lepre and McKinney got excited rather than overwhelmed, “that’s when we got married,” Colter laughs. They’ve been working together for the last two years, developing the initial film proposal into a much more comprehensive multimedia documentation project.

Every Last Hinge
“Our ultimate goal is to archive every piece of Philip Simmons’ ironwork we can get our hands on,” says McKinney. “Everything from the famous City Gates to the fireplace poker my former fifth grade teacher told me about when she flagged me down one day in Lowe’s.” Interns from the American College of the Building Arts are in the process of going down the existing list, confirming, recounting, and photographing each piece, while McKinney, Lepre, Fraser, and Simmons are doing their own four-wheeled fieldwork.

“We pile in Mary Edna’s van, turn the camera on Mr. Simmons, and start driving. It’s a mobile media studio, and Mr. Simmons loves it,” Lepre says. “Mary Edna will prompt him with questions, so he’s telling the story of his life and his transformation from blacksmith to artisan as we go. We’ll find a house where he did work, which then triggers his memory of the next job he did around the corner. The first day we went out, we discovered that six gates were gone, but we found 20 more pieces that weren’t on the list.”

Much of their reconnaissance effort is focused on the “hidden gems,” the lesser-known gates and window grills that Simmons made for modest homes north of the Crosstown.

On Ashton Street, for example, they found a cinder-block home that had a balcony railing, a fence with a gate, and a driveway gate, all by Simmons. “I drive by and see them still standing, and it makes me feel good,” says Simmons. “I took a lot of pride in doing them all. I’m extra particular and careful when I’m doing ironwork, and I’m happy with all of them, don’t make no difference if it’s on the Battery or for people with not so much money. As long as the customer was satisfied, then I’m feeling very satisfied.”

There’s urgency to this endeavor. “We’re lucky that Mr. Simmons has lived such a long life and that he’s still sharp as a tack and can remember things,” says Fraser, but he’s not going to be around forever. And given the brisk pace of urban revitalization on the upper peninsula, neither will all his ironwork. Some pieces have been stolen from properties, while other homes featuring his work are in disrepair and at risk of demolition as new construction encroaches. The plan is to certify pieces with a “PS” stamp and perhaps, McKinney dreams, even tag them with a GPS monitor to be able to track them.

The Unlikely Celebrity
“What’s fascinating about this project is that it’s so technologically advanced,” McKinney says. “We’re using Google Earth to place electronic markers on locations of Mr. Simmons work, so we can ‘fly’ around Charleston and see where the 600-some pieces are. I think when we’re done, it’ll spell something in code,” he jokes. The DVD, featuring an hour-long documentary and a “behind-the-scenes educational video on the artistic process of making a gate, will also include an interactive map, so viewers can click on a Charleston neighborhood to see individual photographs and hear Simmons talk about particular gates. Walking tours with guided audio narration (with comments by Simmons) and detailed maps will be available at the Visitor Center, Avery Research Center, and other locations and downloadable in MP3 format from the Philip Simmons Foundation website. For those who prefer old-fashioned printed materials, Sunhead Projects is designing an art-style coffee-table book that includes a comprehensive “Yearbook” index, with thumbnail documentation of all the ironwork not featured in the main pages.

The Philip Simmons Foundation and Sunhead Projects are in the process of securing the $350,000 they estimate is needed to complete the multifaceted project, now already two years in the works (plans also include augmenting existing school curricula and creating scavenger hunts). Fraser, for one, is confident they will succeed. “It’s such a good project, someone will fund it,” she says. “I see this as a gift to my friend [Simmons] and a gift to the community. It’s a necessity; it has to be done.”

Kitty Robinson, executive director of Historic Charleston Foundation, agrees. “Documenting Mr. Simmons’ legacy highlights the importance of his craftsmanship that is so masterfully and elegantly represented throughout the city,” Robinson says. “He has given us a continuum of excellence and wonderfully placed reminders, from the stateliest properties to the humblest abodes, that Charleston is grounded in the magnificent work of so many artisans. Looking at a Simmons gate, one appreciates much more than wrought iron, but also the history wrought in this place. One can only imagine the strength of those hands and the brilliant mind able to create this beautiful work.”

As for the ever-humble Simmons, his approach to being a movie star and to the documentation project is much more understated. He’s simply having a good time. “I enjoy everything,” he says. “I enjoy going around and looking at it, talking about it, and trying to answer a lot of questions about it. There are very few I forgot about. I remember most of them when I see them, by the looks of them.

“History will speak for itself,” he adds. “This ironwork will be here, and maybe my name will still be around, just like some of the other artists and craftsmen.”