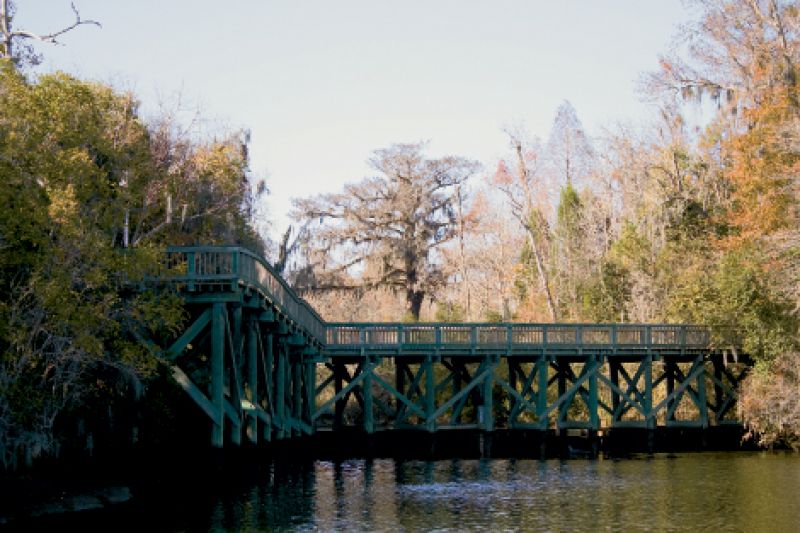 When the air turns steadily cold—all warm-spell teases aside—I get the urge to stomp around on crunchy leaves in the forest and then practice walking silent, Native American-style. So when, in my other life as editor of Charleston Weddings, I came across a celebration at Old Santee Canal Park—with its 1800s clapboard house on a bluff overlooking the Cooper River; sweet, sturdy, simple dock; and woods all around—my ramblings radar perked up.


The promise of a “new” park with four miles of trails—some boardwalk, others plain dirt and timber-framed—on a 195-acre spot in Berkeley County’s backwoods sounded alluring. So I packed up my pup (and his leash, as that’s the park’s only doggie prerequisite) and headed up Highway 78 then over Highway 52. Arriving late afternoon, I tied Oscar to a bench and scooted into the modern interpretive center, with its cool entrance designed to look like a canal lock and its multistory glass wall overlooking the Biggin Creek swamplands. I did a quick read of the history to get my bearings before grabbing a map to hit the trails.


There’s little left to see of the original canal (lakes Marion and Moultrie now hide much of its remnants), since the massive endeavor—begun in the late 1700s to join the Midlands-to-Upstate portion of the Santee River to the Lowcountry’s Cooper River—died out when railroads connected Charleston and Columbia in 1840. Nonetheless, it was a project born of the optimism of a young country, the brainchild of one of its wealthiest states, and quite a feat of the time.


When complete, the canal spanned 22 miles; stood 35 feet wide and some five deep; and contained 10 locks that balanced the difference of the rivers, rising up to 34 feet and dropping as much as 69 to join the two. It took seven years for slaves and indentured servants to complete the cypress and brick canal, but by 1800, they had given cargo ships from the north a straight shot to Charleston Harbor. (Prior to the canal, merchants had to head all the way down the Santee and into the Atlantic, then on to Charleston, costing time, money, and occasionally ships in the temperamental ocean waters.) But the savings didn’t add up. A drought that shut down operations for two years, railroad competition, and building costs triple the original estimate ($10 million-plus by today’s measures) made the canal something of a folly in hindsight.


Coincidentally, a Swede oversaw construction efforts. Funny, considering just five years ago, the Swedes were behind the Ravenel Bridge, which came in under schedule and earned its builders bonuses for time and money saved. As Oscar and I embarked on the trails, I grinned on the bookending of these enormous labors of man. But honestly, once the leaves started crunching and I was out of site of the interpretive center and the bluff house, it was just me and my dog getting skippy from the cold, and the park was just that—a park. We ran up hills (a glory for a Lowcountry dweller), explored boardwalks that shot out atop the swamp, and poked along the riverside trail. And in the crisp air, as I once again felt like the third grader my land-planner mom pulled from school to help her map park trails, I felt my own past bookended, too. —Melissa Bigner