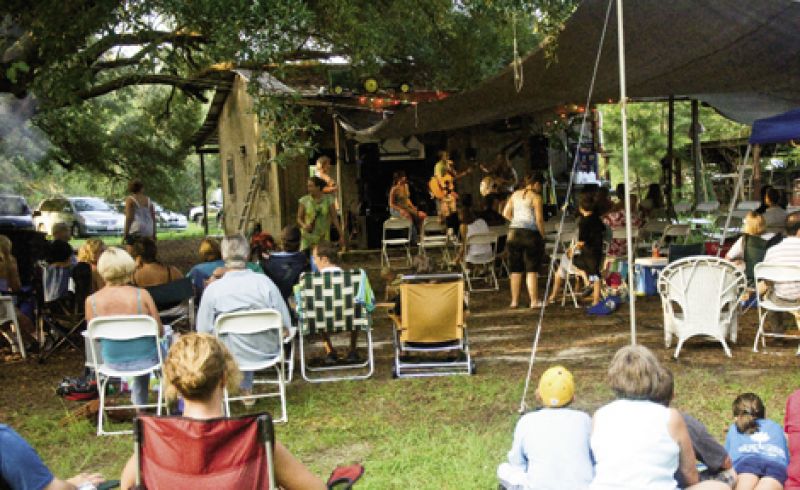 The Lowcountry is home to a certain population of effortlessly cool types, the kind who seem to hover above trends and scenes, dwell in the über-hip land of Comfortable-in-Your-Own-Skin, and relish—but don’t advertise or gloat over—their predilection for off-the-beaten-path entertainment. (Unlike me, they are not inclined to rush home to catch Bristol Palin and “The Situation” compete in Dancing With the Stars.) And as these in-the-knowers talked more and more about Awendaw Green’s free outdoor Barn Jams over the past few years, the regular Wednesday night gigs began to take on a mythic persona in my mind.

So when the heat broke enough that outdoor sitting didn’t turn me into mosquito bait, I recruited my pal Molly Baslow, packed my beach chair, and made a plan to meet at Mount Pleasant’s Jack’s Cosmic Dogs for fries and chili dogs before heading out. (The stop turned out to be unnecessary, as Seewee Restaurant sets up a grill station at the Green with dogs, burgers, and other bites; $5 to $10 can nab a great dinner). Greasy to-go bags in hand, we headed up Highway 17 looking for the Sewee Outpost gas station; Awendaw Green would be “right near there,” our direction giver had said.

On the way, I shared with Molly what I knew about the setup: Dr. Eddie White (a dentist) had purchased three-and-a-half wooded acres complete with a house and barn south of McClellanville. He set up a recording studio in the kitchen and converted the small barn into a performance spot with a porch stage included. Word got out about the laid-back joint, bands from across the Southeast started dropping in to play anything from jazz to Americana to bluegrass to new grass, and somewhere between 20 and 200 folks might show on a given Wednesday. When White encountered some zoning issues with the county, the good folks two doors south at Sewee Outpost offered up temporary use of their land to sustain the music momentum. Molly—who spent much of her childhood in Athens, Georgia, was sporting an Avett Brothers T-shirt when I asked her to tag along, and has had bands play in her John’s Island backyard—got that “my people” glow about her as I went on.

Pulling into Sewee Outpost, we noticed a neighboring field with cars and heard tunes drifting over, then followed a small sign down a narrow road before parking by a big pond. In the midst of the action, the first band, a bunch of Eddie’s cronies (doctor dudes by day; jam buddies by night), were already on stage. Next up, Asheville’s Uncle Mountain had a great singer and solid songs perfect for the setting: the billowing bonfire; a Joaquin Phoenix look-alike clumsily flirting with two giggling teen girls; a kid playing Tarzan on a dangling vine; suburban parents kicking back; mildly alternative types bobbing their heads to the rhythms; and an original hippie taking it all in. Post-hot dog gobble, I sat knitting while Molly played Name That Song—“That’s the Allman Brothers....” “I love Led Zeppelin.” The whole scene lulled me into a calm that no bar band-fest has ever bequeathed me, a mellow born of fresh country air, a community of creatives, and swell music. A cool type, indeed.