Noteworthy Night
May 2011
WRITER:
Melissa Bigner
Lose yourself in Hell Hole Swamp any Saturday night to soak up some bluegrass 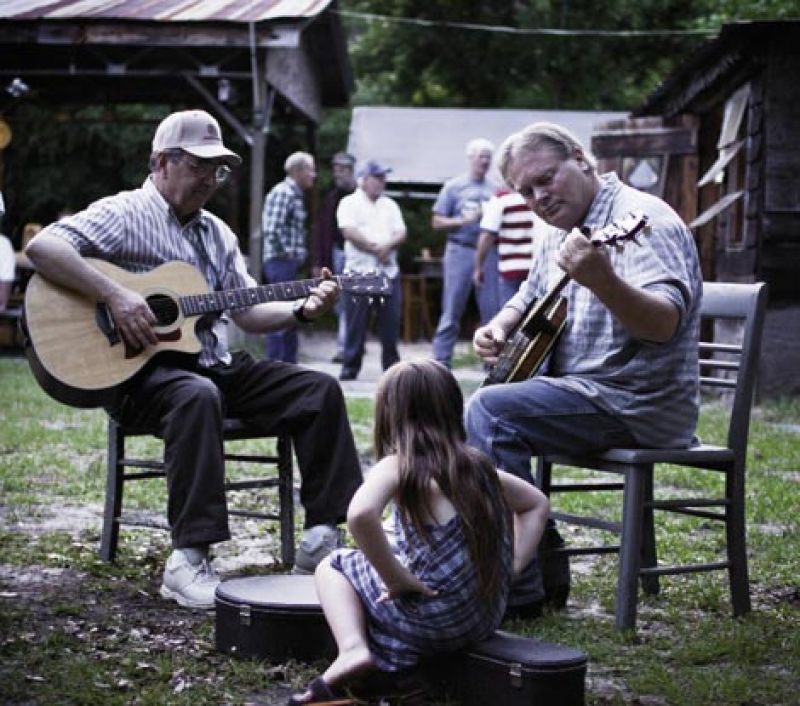 I got lost in Hell about three times—make that Hell Hole Swamp. It happened when a friend and I were questing after a pickin’ parlor out there, a place where bluegrass musicians play each Saturday night to a passel of fans who set out a spread of egg salad sandwiches, mac ’n’ cheese, cobbler, and more in lieu of admission. Before hitting the road, I called the number for Guy and Tina’s Bluegrass Pickin Parlor and reached Tina Faulk in her home, just a few steps from the parlor itself. She assured me, “Oh yes, they’re playing tonight. You best come on!”

Apparently “they” (anyone who shows with a banjo, guitar, base, fiddle, Dobro, mandolin, or such) have played in a weather-beaten shack at the end of Pickin Parlor Lane every weekend from about 6 to 11 p.m. for the past 30 years or so, but Mrs. Faulk was kind enough not to shame me over the rookie question. Kindness runs in the woman’s veins, I learned, after getting wicked turned around in the country dark, several times over. When I miraculously found a phone signal and called her not once, not twice, but three times for help, she couldn’t have been any more patient. After scrapping our vague Web directions and following Tina’s suggestions, we finally got there.

Parking on the edge of the road, we stepped into a soft evening with the tinny sounds of old-time, real-deal country tunes running through it. We headed toward the music and grinned with relief at the parlor’s “no alcohol” sign—after all, we were two gals deep in the swamp heading into a shack where we knew nary a soul. Egg salad crowd or not, we figured things might be safer if the only moonshine came from above.

Our apprehension was—luckily—laughable. First, there was Will, Brylcreem curls spread across his head in pure Mayberry fashion, who welcomed us and asked us to sign a worn logbook. Then a woman near the coffee urns told us we could help ourselves to the food, donate to the jar if we wanted, to please not eat while sitting in the sofas, and that this was a family place, which meant no drinkin’, no cussin’, and no trouble.

With the rules of engagement laid out, my friend and I gingerly stepped past retirees galore, a teen posse, and a handful of middle-aged Mount Pleasanters to find a spot on a sofa that looked straight out of Sanford and Son. It was so worn that, glancing up at cobwebs dusty enough to look like Spanish moss, my friend dared me to put my hand in the cushions for $10. I shush-giggled her and we got to listening, because the band in front of us, Worth and The Friends, was amazing.

A 14-year-old who drove more than an hour to perform here and shake off his classical constraints, Worth Lewallen was a talent who forced his elders to keep up with his hey-diddle-diddle stylings. Some songs were oldies, some were accompanied by the plaintive voice of his dad, some were instrumental dances—all were fantastic. Later, impromptu groups took to the stage and I remember the face of a guitar player who picked with a stoic hangdog expression; the Hee Haw joking of Will Faulk, Tina and Guy’s son; and Guy’s snow-white mutton chops as he crooned why it’s smart to marry an ugly woman.

Looking around, I took in the banjo-toting frog sculptures, signed photos of country stars, mounted deer antlers, and, up there in the eaves, a pair of tiny Confederate flags, a lantern, and a small noose. That last trio didn’t jibe with the vibe of the place so a few days later I called Tina. Turns out, she says, her son got the noose from a best friend when the former married his now ex-wife. (She wouldn’t let the noose stay in the trailer since the gift giver told the groom to hang himself after he said “I do.”) And the flags? One of Guy’s friends said the parlor needed a touch of rebel, Tina said in her cheery nothing more, nothing less manner.

“Just to be sure, it’s a family place? And everybody’s welcome?” I asked. “Why of course, darlin’!” she said. “Anyone can come here. Anyone. And when are you coming back?” On that note? As soon as possible.