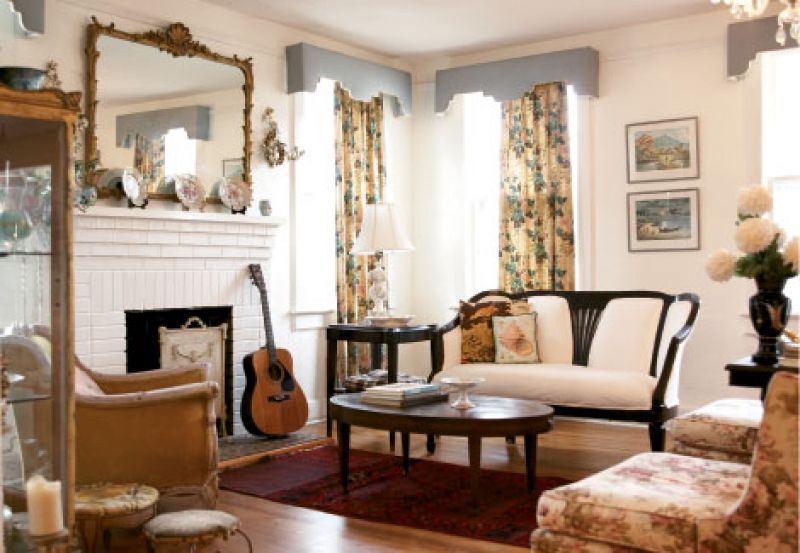 So the NASDAQ has nosedived and the Dow looks dire, but who says a recession has to squelch style? Certainly not the ever resourceful Hollie Wood, whose fresh, young vision for her Park Circle home has never required big bucks. While most people’s disposable income is pretty much disposed, leaving Pottery Barn budgets reduced to pottery shards and Crate & Barrel cravings at the bottom of the barrel, Hollie is still sitting pretty—on chairs that averaged maybe four bucks apiece. Absolutely everything in Hollie’s charming home—from curtain rods to console tables, goblets to gizmos, linens to light fixtures—has a past. Even the faded Ozzie and Harriet wallpaper in the bedrooms is verifiably vintage, “and half the reason I bought the house,” says the proud 26-year-old, with her first year of mortgage payments almost behind her. But here’s the real deal: Hollie’s affinity for secondhand chic is not necessarily driven by budget. Granted, shoestring is about the upper limit for this former teacher who left education to pursue her passion for creative interiors. But even if Hollie were earning a cushy salary, she wouldn’t be spending it on high-end furniture fresh from the showroom. That’s simply not her style. She adores kitsch, preferring patina over polish, timeless over trendy, worn with character over new and in-fashion any day. Think Velveteen Rabbit. Think Grandma’s bedroom—all sepia and sweet, smelling of gardenia and dried roses, feeling like chenille and love. “This is who I am, it’s in my blood,” says Hollie, a self-described junk-store junkie who inherited her hunting instincts from her mother, grandmother, and aunts. “For me, combing junk stores is a mind-set. It’s a passion, a way of life. My friends will say, ‘I need wine glasses, let’s go to Target,’ and I’m like, ‘Are you kidding? Wine glasses are a dime a dozen at the thrift store. So what if they don’t match? All the better! Each one has a story.’” A native of Chapin, South Carolina, Hollie was indoctrinated as a crack-of-dawner early on, going to the Columbia flea market every weekend as a child. Her current thrift addiction is fueled by happy childhood memories from those wide-eyed excursions. “Even when I was young, I was fascinated by flea markets. There were books, toys, live animals—everything. I was so intrigued that one place could have so much stuff. You never knew what you might come home with—maybe a parakeet, a bunny,” says Hollie, who successfully talked her mom into three rabbits. She and her mother befriended the vendors and knew their schedules. Take Tommy, for example, “a rough-around-the-edges guy who’d show up every third Saturday with a truck full of treasures from Ohio or New York or who-knows-where. You had to be there as he was pulling up to get the good stuff,” says Hollie, who bought her college desk, an ugly-duckling cedar beauty obscured by hideous brown paint, from Tommy for five dollars. It was the first piece she stripped and restored, learning valuable tricks of the secondhand trade in the process. “Every time I see him now he asks about my desk.” When Tommy’s house burned two years ago, Hollie and her mother helped him out at Christmastime. What goes around comes around seems to be their rule of the flea, in more ways than one. Even though it’s a “generational thing,” Hollie carries on her family’s shopping tradition with a twist. Her grandmother outfitted her home and children from flea-market finds because she had to—there wasn’t enough money for new shoes for four kids. Likewise, Hollie’s mother was driven by economic necessity. Nobody has to know these aren’t from the department store, both women would whisper. “But I don’t try to hide where all this came from. I’m proud of it. I’m proud that my mother and grandmother instilled these traits in me,” claims Hollie, whose well-trained eye can ferret out real jewels, as her collection of classic hand-carved alabaster lamps, flo blue china, and Victorian butterfly dishes attests. There’s sport involved: “The real deal is to dig it out of a pile of trash,” she says, frowning at eBay. (“Anybody can go to the computer and type in a search word.”) Her clothes, shoes, tableware, pillows, gift wrap—everything is a souvenir of the various “junk holes” she haunts. Her interior design scheme is simple: recycle, reuse, repurpose, redesign. “I change lamp shades like most people change purses,” admits Hollie, whose first collection was, in fact, hand-tooled leather purses and bags. However space is limited: the walls of her 1948 three-bedroom, two-bath brick house are getting crowded with trophies: antique etched glass mirrors and abundant floral still lifes, artfully arranged. Before buying the house last May, Hollie had a booth at a local antiques and decor mart where she stashed most of her goods, but was delighted to transfer it all to her own pad. “Selling is hard—I couldn’t bear to part with most of it. There are memories tied to each piece,” she says. “Now I love coming home to all my stuff. It’s so rewarding to put all these memories to use.” Equally rewarding is knowing that her purchases not only didn’t break her bank, they helped out someone else. “This look is original; nobody can re-create this,” says Hollie, who proves that good taste and Goodwill are complementary. “I’ve created a home that not only looks beautiful but has beauty from within it as well. I love knowing my purchases have helped those less fortunate. Almost all the thrift stores I shop in support good causes. For me, that’s the most satisfying part.”

There’s an art to efficient scavenging, and Hollie has honed her technique over decades of practice. She knows where the good stuff is and how and when to strike. She’s not about to reveal all her secrets, but here are a few tips to get you started: • Go early and often. You snooze you lose in the flea game. By the time your Saturday coffee is poured, Hollie has landed a couple of silk embossed lamp shades ($1 each) and lovely brilliant-cut candy jars. Be a frequent shopper at thrift stores, if only for a whirlwind five-minute glance. Speed browsing helps train your eye. • Be impulsive. Again, you snooze—or stall—and you lose. If you like it, buy it. You can find a use for it somewhere. • Pay attention. All the time. Dumpsters, piles by the side of the road—it’s all fair game. • Go solo. At least, that’s what works for Hollie. She still loves shopping with her mom, but “friends just slow me down, and you’ve got to be nimble and swift.” • Be a good sport. If her mom snakes her on a find, Hollie might be a little jealous, but she shares in her mother’s excitement. “It’s one of the rules,” she says.