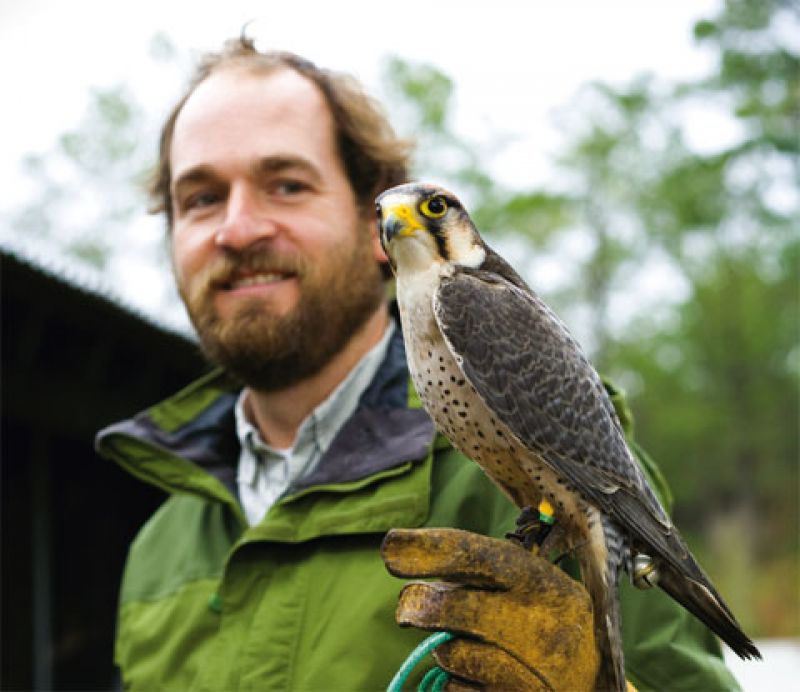 "Hang on one second, let me park my golf cart,” Stephen Schabel Jr. says over the hum of an electric motor. He is roaming the grounds of Awendaw’s Center for Birds of Prey, where he serves as the education director, in search of a wayward bald eagle. “That’s better,” he reports from a quieter location. “Now what can I do for you?”

While it may seem unusual to the rest of us, searching for eagles on a Tuesday afternoon is business as usual for Schabel, who is charged with the care and feeding of more than 100 birds at the nationally recognized rescue and rehabilitation center. In addition to developing curriculum, leading workshops, and collaborating with local schools, he and his small staff look after a collection of hawks, owls, and other winged raptors. It’s an unusual job, combining avian biology with education. So unusual, in fact, that many question just what kind of training would prepare someone for such a task. The answer lies in the College of Charleston’s Master of Science in Environmental Studies (MES) program.

Schabel, along with a growing cadre of activists, educators, and researchers, is a 2004 graduate of a unique multidisciplinary training program that is changing the face of environmentalism. The degree combines hard science with public policy, preparing students for dynamic roles that call for more than one specialty.

Founded in 1994 as a joint effort with MUSC, the program was initially designed to focus on the human health impact from pollutants and environmental hazards. Its aims were remarkable in the context of the times: the Soviet Union had only recently collapsed, iPods were barely a figment of Steve Jobs’ imagination, and the truth about climate change was so inconvenient the general public wasn’t even aware of it yet.

By the end of the decade, reduced grant funding and diverging aims ended the partnership with MUSC. Rather than jettison the fledgling program, College of Charleston officials took real ownership of it, investing new funds and expanding the coursework. Today, the MES track ranks as one of the college’s largest graduate programs, with more than 75 students currently enrolled.

“I was drawn to the program through the faculty,” says Megan Barks, director of North Charleston’s Michaux Conservancy, a wetlands restoration and education organization. “They’re active in research and public health projects and very committed to their work. It gives students an opportunity to get involved and be a part of the process.”

After graduating from the College of Charleston with a degree in biology, Barks envisioned a career in scientific study. That changed when she found herself dissatisfied at the prospect of life in a lab coat. “I thought about law school, veterinary school, all kinds of things. I remembered a lot of classes I wanted to take and discovered that many were offered in the MES program. The more I learned, the more interested I became.”

What appealed to Barks was the program’s balanced approach, combining environmental science with training in public policy, fundraising, entrepreneurship, and more. “Our students don’t have a well-worn career path laid out for them,” says program director Dr. Kem Fronabarger. “It’s not the same as medical school or law school, where there is an established pattern for students to follow. So we try to help them become well-rounded and prepare them to lead.”

The program’s holistic approach was important to Ben Leigh (2007), now programs manager at the Sustainability Insti­tute. “Protecting the environment is more than just protecting nature,” he says. “You have to consider human impact, be aware of the law and economics, and understand the process that leads to real change.”

Armed with the public policy and educational training he received through the program, Leigh specializes in energy consultation services and leads workshops that help people make sustainable decisions about their homes and daily activities. The work is hands-on and collaborative, a far cry from the solitary research or aggressive activism that forms popular stereotypes about environmental advocacy.

Schabel’s journey to the program was anything but direct, and included teaching in the public school system and a stint as a full-time musician. “I’m a teacher at heart,” he concedes, “and people around me recognized that. The faculty was very helpful in guiding me to where I am today.” Schabel became the education director for the Center for Birds of Prey six years ago, “directing an education staff of one,” he laughs. His role has expanded since then to include more help, more birds, and an endless stream of people to reach with his message of avian preservation.

Schabel uses his position as a platform for advocacy, specifically the protection of threatened raptor populations. It’s a role that is typical of MES graduates, a group motivated by a strong desire to change and improve the world around them.

“Our program is not in its infancy, but it’s still youthful,” Fronabarger muses. “Yes, we’d like more funding and more resources, but I believe we’re already one of the best in the country.”

One fact is undeniable: graduates of the MES program are flooding Charleston’s environmental advocacy community, assuming leadership roles and setting the course for future conservation and sustainability efforts. And they’re armed with more than just a classroom knowledge of the process. “We don’t just understand why things need to change,” Leigh observes. “We’ve also learned how to change them.”