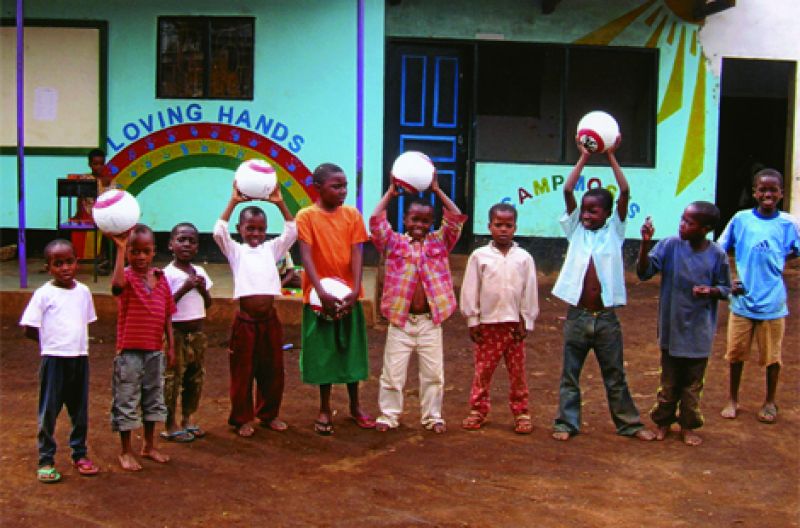 ­As the single-prop plane de­scended into Arusha, Tanzania, I stared out at the vast savanna to the hazy reaches of Mount Kilimanjaro. The pilot, meanwhile, negotiated the plane between roaming cattle and nomadic Maasai. This was the Africa I expected—the Africa of the glossy brochures I read before embarking on this month-long vacation to one of the last great unspoiled places in the world. I never saw that Africa again.


The 50-hour journey from Charleston had brought me to the village of Kwangulelo, though not as a tourist. I had arrived on a volunteer mission to work at the Living Water Children Centre, an orphanage founded two years prior. Though I couldn’t explain why I had chosen to take a vacation that was not by today’s definition a vacation, I did have an answer in my head. The reason had to do with Hineni, Hebrew for “Here am I.” As referenced in the book of Isaiah, it means not simply existing, but being fully present and willing to engage.


A 20-something man in jeans met me at the airport. “You must be Teacher Lee,” he asserted in African-accented English. “I am Walter, second son of Kimaro.” Having speedily memorized my English-Swahili phrase book on the journey, I responded in Swahili, surprising my guide.


We clambered into an old Toyota Land Cruiser and began making our way down the muddy dirt road to the home of my hosts, Anza and Dora Kimaro; their five sons, David, Walter, Christian, Tuzo, and Hans; and Ulu, the German shepherd. David and Walter quickly stepped in as my caretakers and still remain like my brothers. And over the next month, Hans became my student and Ulu my watchdog, often sleeping outside my room.


Anza and Dora fed me jaboti (crêpes), ugali (grits), and fresh pineapple while giving me an orientation to the orphanage, which was a 10-minute walk from their house over a narrow footpath through banana trees and tall grass. During the tour, I learned that Anza started the Living Water Children Centre with his family after encountering a boy eating garbage on the roadside. Stopping to ask why, he discovered that the child’s parents had died of AIDS. Anza brought the boy home to feed and clean him. The next day, Anza contacted a government friend, who explained the widespread problem of orphaned children (UNICEF estimates that there were 48 million orphans living in Sub-Saharan Africa in 2005). Anza immediately began the process of adopting the child named Tuzo and soon thereafter quit his job as an architect to provide shelter, medical care, education, and love to orphans.


The orphanage typically houses about 30 children in a three-room masonry building with no plumbing and only sporadic electricity. One bedroom is for boys and another for girls, with a common area for shared meals. The backyard contains three rustic buildings fashioned of corrugated metal nailed between trees: the schoolhouse, with three full-time teachers; the outhouse; and the cookhouse.


It took the better part of two days for me to learn the kids’ names (a task made trickier by the boys who kept switching shirts to fool me). My role consisted of teaching English, mathematics, and science in the morning and, after lunch, giving medical care, teaching hygiene, doing crafts, and playing soccer. Dinner was always followed by story time.


But their books didn’t tell the horrible, yet often unknown, pasts of these children—stories more terrible than can be imagined. To see their smiles, you’d never know their pain, but if you look deep, you can feel it. By day two, I understood unconditionally why I had come to Africa: the children were as much there for me as I was for them. They showed only love and sharing, and we quickly became family. The children call Anza and Dora baba (father) and mama (mother) and everyone else kaka (brother) and dada (sister).


The Kimaros are helping to allay the pain, but there is more to be done. I am reminded of the words of Maya Angelou, who wrote in honor of mothers: “It is true/I was created in you./It is also true/That you were created for me./I owned your voice./It was shaped and tuned to soothe me./Your arms were molded/Into a cradle to hold me, to rock me.” These children and millions more will never know their parents’ love. So I will return as often as possible, and I encourage others to explore taking a volunteer-vacation. Hineni.