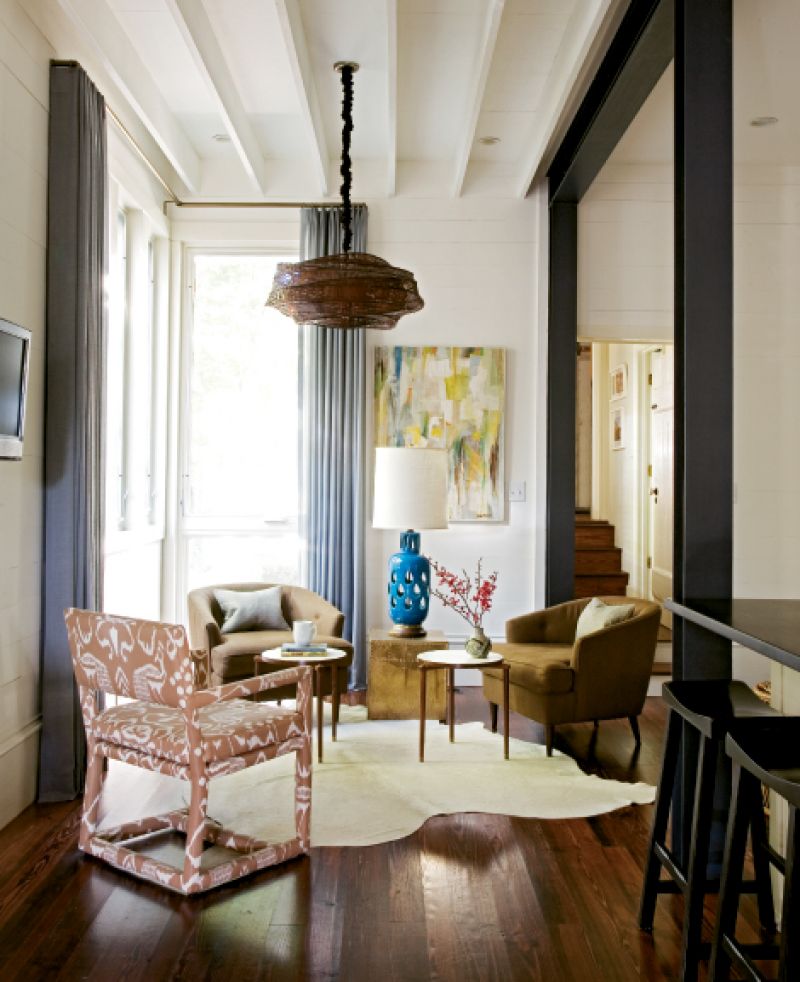 I grew up in an old house. It was a big old place in Cartersville, Georgia, with 17-foot ceilings and tons of character. We never moved anywhere else—that was home for me.”

Carolyn Evans sits in the wide-open kitchen of her “new” old house, recounting how it is that she and her husband, Ray (also from that small town in northwest Georgia), came by their rambling Pitt Street single. It’s a love story, really, one befitting the seasoned songwriter and refreshingly frank author of marriage and sex self-help book Forty Beads (Running Press). Her much-buzzed-about approach to relationship bliss has netted a good deal of local and national press—including an appearance on the Today show—and cemented her rep as a gal who knows a thing or two about falling head over heels, and staying there.

“We came to Charleston by way of Atlanta in 1997, a few years after we got married. Our daughter, Reese, was just a year old then,” she explains. “We rented a place downtown, then moved to a newer house in Mount Pleasant. The whole time we were there—almost seven years—I was dying to get back in an old house. I needed that grit, that history.”

One day, a girlfriend and fellow songstress called. She’d scheduled a photo shoot at an historic residence downtown and asked Carolyn to meet her there to help style her. “I walked in and immediately felt at home. I thought, ‘This is it, this is my house.’”

In fact, it was the photographer’s house. Craig Olsen, whose work has appeared everywhere from Kodak and IBM campaigns to editorial spreads in Esquire, Time, and Newsweek, and his wife and two children lived in the three-story, 4,000-square-foot main house and had fashioned a studio out of the carriage house (linked via a hyphen), handsome with original pine beams and ample midday light.

But it was just Carolyn’s type: built in 1840, it had that effortless charm that comes with age, plus a quiet, ground-floor apartment for her parents to visit; a roomy backyard (where son Marshall, age seven, and others have unearthed artifacts ranging from mid 19th-century coins to old Charleston pharmacy bottles); and a sunny, rear office for her creative pursuits.

Was it perfect? Of course not—but nothing ever is, when you look close enough. “The kitchen was terribly outdated—just a narrow galley space with one small window,” Carolyn explains. “And there was an odd breakfast room smack in the middle of the porch.”

Still, Carolyn did what any good romantic would do—she waited for it. For three years, she courted one downtown listing after the next, waiting for the day that single house on Pitt Street would be, well, single again.

Then one day it was, and she and her husband scooped it up. “Ray only saw it once before we bought it, but he knew….He knew this was it for me,” she recalls, then laughs: “When we finally had the key, I told him I wanted to go over and see it again. He said, ‘I know what you’re going to do when you get there. You’re going to walk through those rooms and run your fingers along the walls.’ He was right. I was so in love with this house.”

Once they’d snagged it, the next step was making it work. The Evans brought in architect Gordon Nicholson and builder Mike Taylor to open up the slim, closed-off kitchen and create a central cooking and living spot for the family. To do this, they tore down the wall separating the galley from the breakfast room. Then they bumped out the southwest corner of the space to add 100 square feet and a new bank of windows.

After replacing appliances and fixtures, countertops and lighting, they had what they needed: a modern kitchen to serve as the heart of the home. “I believe every house needs this—a place where
everyone gathers, where you can always find one another. Our home had a lot of soul, but this room finally gave it a heart.”

On the advice of Nicholson, Carolyn called interior designer Angie Hranowsky to help her make best use of all the freed-up space. Specifically, how to create a comfy, good-looking sitting room out of that expanded corner?

In came a pair of chic, low-slung chairs that could sit in front of the windows without blocking the sunlight, an oversized lamp Angie found on eBay, and a Brazilian cowhide rug. The eclectic-minded designer also suggested a clean white Benjamin Moore hue for the walls, charcoal gray for the central support beam, and a muted blue Donghia fabric to frame the windows.

“I learned that Angie’s a color sorceress,” Carolyn says. “She’d put colors together and I’d think, ‘Umm, well…’ and it would turn out to be this delicious combination. Sort of like adding sea salt to chocolate—you wouldn’t think you’d want that, but then you taste it and you love it.”

Because Angie proved as good a match for Carolyn’s laid-back aesthetic as the house itself, the two kept going. Inspired by the drapery color in the sitting room, they replaced neutral walls in the adjacent dining room with that cool, dusty blue and hung large-scale paintings at either end (one a textured floral by local artist McLean Shepard and the other a dreamy graphic piece the designer picked up at an antiques store in Minneapolis). Angie paired the Evans’ traditional dining table with painted vintage chairs (instead of the matching set) and punched them up with a David Hicks pattern.

Carolyn’s heirloom Oriental rug and a bottle-cap portrait by artist Molly B. Right gave them a start for the color palette in the living room. Angie reupholstered Carolyn’s white slipcovered sofa and armchair; treated a pair of antique table lamps to modern, updated shades; and found a pale, peachy hue to perk up the white walls (“Carolyn and I went through eight, maybe nine colors until we got the right one,” says Angie). Then they added a rattan McGuire coffee table and other eclectic vintage finds.

“Angie is great at using what you have and mixing it with updated pieces or fabrics,” says Carolyn. “That’s why these rooms work. We used the furniture we already had as a starting point, so they’re very much ‘us.’”

Indeed. The back carriage house still has its built-in desks and display panels from its former life as a hard-working photography studio. But now, it’s all homework and art projects back there, a cozy spot reborn as a family room. Just beyond that is Carolyn’s sunny office, where she sits most days penning lyrics and responding to e-mails from her growing Forty Beads following. Below, in the yard, Marshall hops on his trampoline or digs for more treasure.

You can bet this, at least in part, was what Carolyn saw that first day she laid eyes on the old house on Pitt Street—and why she stuck with it. Good love stories, after all, only start with happy accidents. It’s making them stick that takes heart.