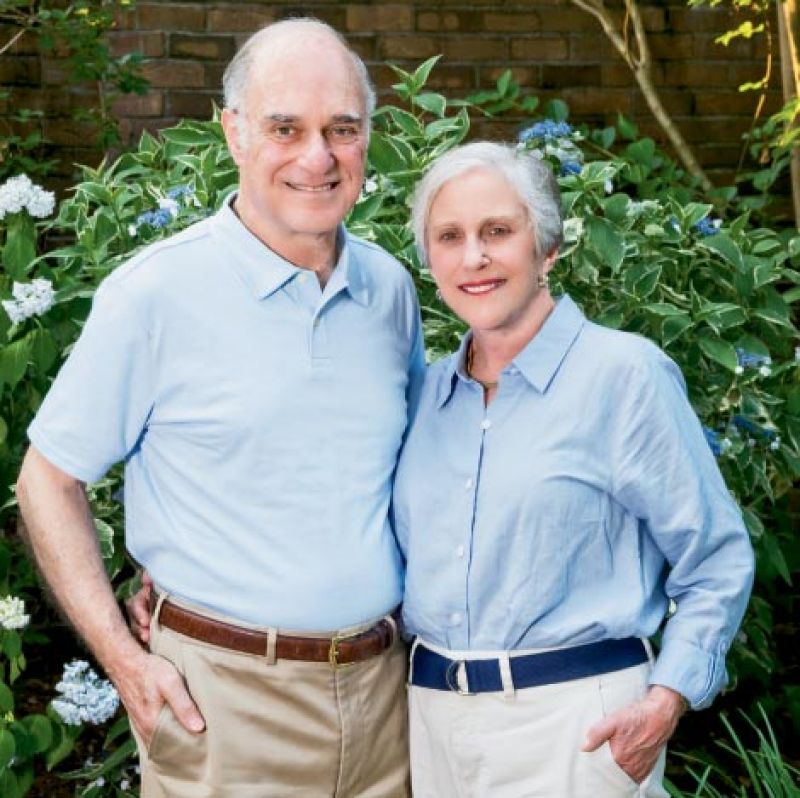 When Ashley Hall student Shira Cohen, now a freshman at Prince-ton University, was helping clean out a school storage closet, she couldn’t stand the idea of throwing away little-used notebooks, so she initiated Project Fresh Start, which collects and donates unused school supplies to students at Mary Ford Elementary School. To Shira, seeing an opportunity, identifying a need, and filling it was simply what you do; it’s in her blood, thanks to the legacy carried forth by her grandparents, David and Linda Cohen, a legacy manifest not only in Shira, but in all the extended Cohen clan.

David is a Walterboro native whose father, Sol, was an entrepreneur with a big heart for civic engagement and supporting the Jewish community. Linda grew up in Norfolk, Virginia, where her single, widowed working mother, despite modest means, actively contributed to the greater good. “We like to say we are simply standing on the shoulders of those who came before us,” Linda says. “It’s our mantra, that and our belief that we owe our children only two things: an education and an example by which to live.”

One doesn’t have to look far to find good examples that David and Linda are setting for their three grown sons and five grandchildren, as well as for the larger Lowcountry. David, a financial advisor for Merrill Lynch, has served on innumerable boards, including those of the MUSC Heart and Vascular Center and the Lowcountry Food Bank—which his father helped establish in 1983—as well as twice for the Coastal Community Foundation. Linda’s involvement is manifold as well, though she prefers hands-on volunteer tasks to being in the boardroom. “I’m a worker bee,” she demurs. “I love working with the full gamut of people I meet on various committees. It’s fun, while helping raise money for a good cause.” The American Cancer Society, American Heart Association, Race for the Cure (original steering committee), the Charleston Kids Fair, Hospice, MUSC, Roper St. Francis Healthcare, and the Ladies Benevolent Society are among the organizations that Linda has served and supported.

“The Cohens’ kindness is contagious, inspiring us all, and their leadership guides organizations to become stronger,” says Sarah Evans, former development director of Addlestone Hebrew Academy, one of the primary beneficiaries of the Cohens’ philanthropy. Their passionate support of the Charleston Jewish community has been unfailing, whether through volunteering at Addlestone, which all three Cohen boys attended; or leadership of the Jewish Endowment Fund, which David helped launch in 1996, serving as its first chair; or through managing the Sol & Celia Cohen Endowment Fund, established in honor of David’s parents to support literacy, food for the hungry, Holocaust remembrance, and numerous important Jewish causes.

For the Cohens, giving back is all about building community, and improving education and literacy, they believe, is key to a stronger future. To that end, the pair established the PJ Library at the Charleston Jewish Federation, a book club that mails Jewish story books to children who register. “We hope to help engender a new view toward education, one that is meaningful and prepares young people for jobs of the next century,” David remarks as Linda nods in agreement. “We’ve been very blessed,” Linda adds. “As Jerry Lewis put it, we’re ‘just paying rent for being on this earth.’”

Generations of Generosity
David and Linda Cohen are caught in the middle, and glad to be there. As children, they were taught to always give back, a lesson they’ve passed on to their children, who have in turn passed it on to their kids. One organization in particular has benefited from the Cohens’ community-mindedness: The Lowcountry Food Bank. It was begun in 1983 by a group that included David’s father, Sol, a wholesale grocer and food distributor who saw a better use for dented cans and other unsalable food items. Today, the Lowcountry Food Bank distributes food to 320 member organizations across 10 coastal South Carolina counties.