Less is More
August 2014
Thanks to a totally efficient design, an eco-minded family downsizes into the modern and sustainable home of their dreams without sacrificing an ounce of comfort 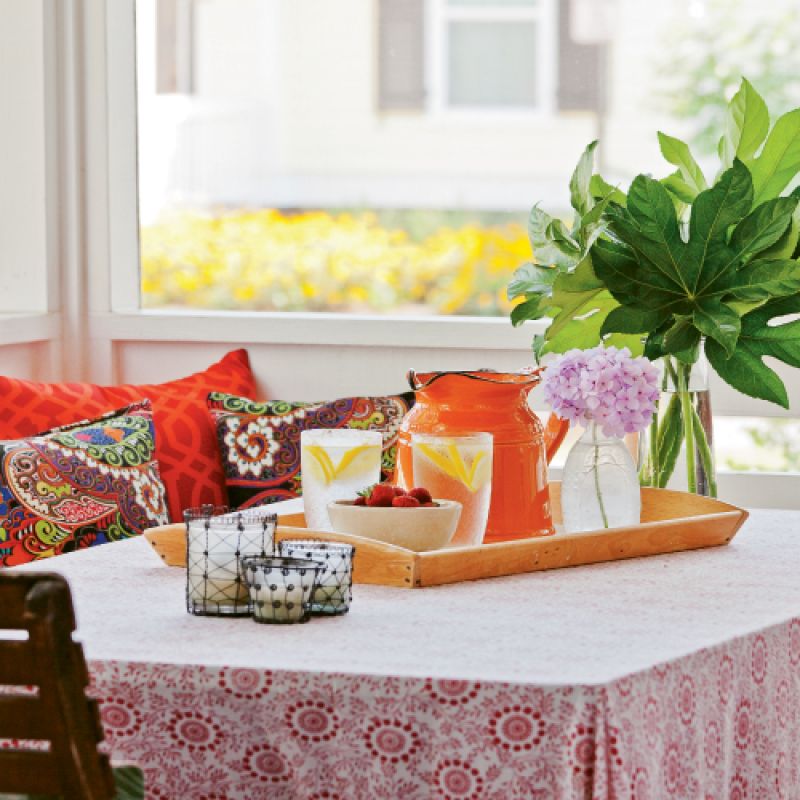 It’s the house that was inspired by a houseboat—and by the desire to live more simply. After a trip to Sausalito, Jennifer Mathis and her husband, Mike Cline, were especially taken with the “everything-in-its-place” design philosophy seen in the floating homes of the Northern California region. The couple had already downsized back in 2008, moving from a 2,400-square-foot home in Awendaw to a 2,100-square-foot place in Mount Pleasant. But after observing the ingenious use of space on houseboats, complete with built-ins and multipurpose furnishings, they began to crave an even smaller—yet way more efficient—abode for their family of four.

Around the same time, the Mathis-Cline clan stayed comfortably in their 900-square-foot family-owned vacation house—an experience that cinched the deal. “We realized we were living too largely, and that we could get by with much less,” Mathis says. And so, after buying a plot of land in North Charleston’s Oak Terrace Preserve, the family set about building the space-savvy, 1,730-square-foot home of their dreams.

A Modern Exterior, With Warmth
A less-is-more approach seems fitting for this eco-minded brood. Mathis, an interior designer, is also the brains behind From Here to Sargasso, a local initiative that aims to educate folks about trash in the ocean via public sculptures made from garbage found in local waterways. Her husband shares her passion: a teacher at Pinckney Elementary, he helms the school’s long-running Ecology Club. Daughters Elsa, 16, and Maya, 12, both students at Charleston County School of the Arts, already have similar values: despite the summer heat, they often petition their parents to keep the A/C off to save energy. The family has long used salvaged materials to express their personal style—in their Awendaw home, Mathis even crafted wall hooks from found tree branches—and they regularly scour vintage shops for secondhand steals. The idea of using space more efficiently fell squarely within their reduce-recycle-reuse philosophy.

In recent years, Mathis’ architectural tastes have become more modern, so she knew she wanted the new home to have a sleek-looking façade. To get started, she reached out to The Verdi Group, a green-focused design-build firm. Together, they got approval from the city to build a structure slightly more modern than its neighbors. Shed-style roofing creates a dramatic angular silhouette, while strong linear elements—both vertical and horizontal—foster a look that’s decidedly contemporary. Still, says Mathis, “this home needed to fit its neighborhood, which is much more cottagey, so we used white shiplap and board-and-batten on the exterior—materials that echo the neighboring homes.”

Verdi also helped the couple incorporate sustainable elements into the design, such as a light-colored metal roof, tankless water heater, raised cement foundation that pulls double duty as cement flooring, and Structural Insulated Panels (SIPs), which keep the home well-insulated and temperate. “The panels are kind of like an ice-cream sandwich, with plywood on the inside and outside and Styrofoam in between,” Mathis explains. “They make a really tight house. When it gets hot, the place stays at a good temperature.”

Mod homes can sometimes feel impersonal, but not on Mathis’ watch. “I love modern architecture, but I don’t like when it crosses a line and you lose warmth,” she explains. “Plus, my interior design tastes are way more eclectic, and the inside and outside needed to feel cohesive.” To that end, she sourced rustic Adirondacks made from salvaged wood, bought cheerful green patio chairs from Target, and repurposed an industrial cart as an outdoor table. Thus furnished, the tree-shaded green space sets a laid-back tone that’s echoed throughout the interiors. “We all gravitate toward this area,” she says. “Mike was playing his guitar out there the other night, and he was in heaven!”

Packed with Personality
“I love interiors that have a story—when you walk into somebody’s space, and it speaks to who they are,” Mathis says. That’s certainly true of her own home. Upon entering, guests are often met with music trailing from a turntable in the living room. “Our daughter Maya recently discovered Simon & Garfunkel, so if she’s around, one of their new-to-her records will probably be on,” laughs Mathis. The airy, art-filled room sports other personal touches. Built-in shelves, made by friend Bill Bennett of Bennett Builders, Inc., house a lively jumble of books, framed photos, and knickknacks collected along the family’s travels. Mathis’ resourcefulness is evident here, too. Rather than throw out a dated side table, she gave it a new look by adding a simple wooden top with an aluminum rim. A metal fish sculpture from Beaufort-based artist Eric Longo hangs high on the wall, looking out over the scene.

In the adjoining eat-in kitchen, high-gloss white cabinets and neutral walls make the perfect backdrop for vintage and DIY touches. Mathis and Cline opted for a red quartz counter top and multicolored tile backsplash, which they helped to design and install. The couple handcrafted the pantry door from cypress left over from their living room ceiling, and in their typical creative fashion, appropriated a rolling pin as a handle. Mathis upholstered the floral dining chairs herself and found the funky wicker light fixture that hangs over the kitchen table at a secondhand shop. Clever built-in bench seating, inspired by the Sausalito houseboats, makes the most of the room’s small footprint.

Situated just off the kitchen, the screened-in porch is where the family—including dogs Daisy and Mudge—spends most of its time. Big enough to accommodate a full-size table, the space serves as an outdoor dining room. “More of our meals are eaten out here than anywhere else,” Mathis says. A patterned tablecloth and pillows—some handmade by Mathis from collected textiles, some store-bought—add vibrancy and color.

Down the hall from the kitchen, Mathis continued to work in color and pattern by applying a spirited stencil print across a master bedroom wall. A range of art pieces also brighten the couple’s room: a landscape by daughter Elsa, a pen-and-ink drawing by noted contemporary artist Elmer Schooley, and an etching of a group of penguins gifted to Mathis by her sister. “Our places don’t feel like home to me until we have some of our familiar pieces on the wall,” she notes.

Artwork—including a colorful family portrait by Columbia-based artist Marius Valdes—also lines the ruby-red stairwell that leads up to the second floor, which feels almost like a dormitory for the girls. Here, their rooms are separated by a cozy living area where the gang often gathers to watch movies on a projector screen. Clerestory windows flood light into their bedrooms, where the houseboat inspiration is again evident through built-in desks and lofted beds; 12-foot ceilings, afforded by the shed roofing, make the latter possible. “In a small space, you need tall ceilings so you’re not feeling claustrophobic,” Mathis says. The lofts also provide additional floor space, which serves the girls’ individual interests. Elsa’s nook involves extensive book storage for her ever-growing collection, and Maya, an aspiring hostess, uses hers as a mock apartment to entertain visiting friends.

The family may have downsized, but thanks to careful planning, clever design, and their own particular brand of resourcefulness, they haven’t sacrificed comfort. They’ve created a super-efficient modern home that oozes warmth and personality. It’s a place with green infrastructure that reflects their concern for the environment. It’s a place that plays to their love of nature by providing outdoor rooms where they can gather and Cline can strum his guitar. And most importantly, it’s a place where everyone has more than enough personal space, but the best times are spent together. “This is a great space for us,” Mathis says. “We’re getting a little older and hopefully a little wiser, and we realized we just didn’t need all the things we thought we did.”

Look beyond an item’s intended purpose: “I’ve used tablecloths, shower curtains, and old clothing for pillows and window treatments,” Mathis says. She also gets creative with hardware, employing everything from cutlery to marine cleats to rolling pins as drawer pulls and door handles.

Source second-hand stuff: She often scours Craigslist.org and Habitat for Humanity ReStores, but perhaps her favorite source is the curb. “Particularly in affluent neighborhoods, I’ve turned up a crazy amount of good stuff on the side of the road,” she says.

Strike a bargain: “We love art but don’t have a lot of money,” Mathis notes. In the past, she’s made deals with artists who let her pay for pieces over several installments.