Joggling Board
October 2013
WRITER:
Suzannah Smith Miles
It just might be the most unusual—and enjoyable—of all Charleston creations. 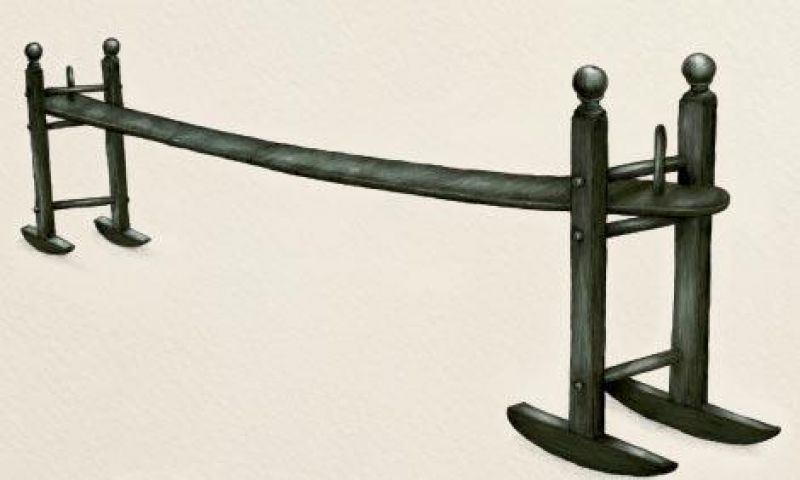 Part children’s toy, part porch rocker, part decorative element, this traditional asset to piazzas and gardens is simply two wooden stands that have a long and supple plank sprawling between them. Joggling boards have delighted Charlestonians young and old since the 1800s, but did you know they almost disappeared from the peninsula during the last century? Find out why!

Tradition Holds
You rarely see a joggling board that isn’t painted “Charleston Green,” so dark it almost looks black.

Rock Star
The 16- to 22-foot long, 13-inch-wide board was customarily made of longleaf pine, though short supply of that material has resulted in yellow pine being used for today’s versions. Both woods are durable and strong, with enough give that boards will bend without breaking. Rockers are often added to the bottom of the stands so that you not only bounce, but rock back and forth, too.

History Mystery
No one’s certain how the accessory was invented. The most-told tale is that in the early 1800s, a local dowager suffering from rheumatism received plans for making one from a relative in Scotland, who said its bouncing would assuage her malady. Others believe it was introduced by slaves, the word “joggle” coming from the Senegalese “juga,” which means “to rise.” One way or another, they were common in the city by the mid-19th century.

Meet Cute
In the Victorian era, joggling boards were also jokingly called “courting boards,” favorite places for sweethearts to meet, with the gentleman on one end, the lady on the other. As they bounced, they’d gradually be brought closer to the middle—and each other.

Back in Action
The board’s popularity waned during World War II, when timber became harder to obtain. Luckily, Charlestonian Thomas Thornhill revived the furnishing in the 1960s, when he started building pieces for friends in his basement, eventually establishing the still-successful Old Charleston Joggling Board Company with friend Leonard Fulghum.

Rock-a-Bye Baby
Joggling boards have long been used for rocking babies. In earlier days, Gullah nurses, called “dahs,” would sit holding their charges in their arms, singing a soft lullaby as the gentle bouncing soothed the infant to sleep.