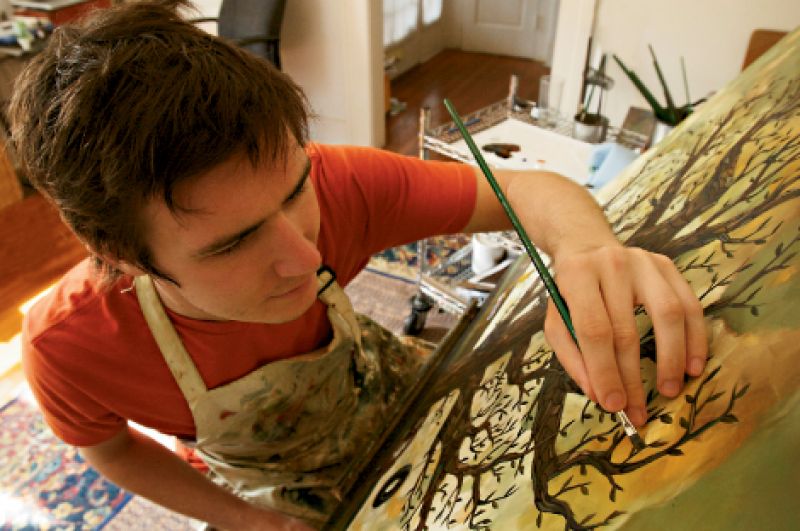 Nathan Durfee’s fanciful oil paintings—filled with mermaids, elephants, sea adventurers, songbirds, and fluffy clouds—bear evidence of comic book inspiration. There are speech bubbles, graphic symbols, and characters. Many pieces are painted in series, and a sense of humor washes over all. But 28-year-old Durfee manages to transform these elements into visual narratives bursting with emotional depth and artistic complexity.

Durfee’s tableaux tell coming-of-age stories that explore discovery, maturity, and the loss of innocence. Take his four-panel narrative of Angry Panda—“I only call him that because I haven’t picked out the right name yet,” says the painter. The first panel portrays a panda in a rowboat, cursing a rock that will not move out of his way. In the next panel, a mermaid is alarmed by the panda’s anger. The panda yells at her to leave (his fury conveyed in a speech-bubble exclamation), and she does. In the final panel, Angry Panda’s boat capsizes, and he drowns.

“This narrative is quintessential of how I work,” says Durfee. “I start with a simple story and then establish the moments in between. Over the past two years, I’ve become settled into a certain cast of characters, and I am now digging deeper into those stories.”

Durfee explains how Angry Panda’s story is allegorical, speaking to a universal human experience. The rock blocking Panda could represent a partner in his way, the mermaid is help he refuses, and the dark clouds in the distance could symbolize looming sadness.

“I struggle with the question of how up front to be,” says Durfee. “It’s a tightrope walk between being obvious enough with my message and letting people appreciate pieces on their own terms.”

Durfee’s professors at Savannah College of Art and Design encouraged him to push the limits of reality, creating his own version of it on a two-dimensional surface. In the process, he created his signature patchwork painting style. “At first the patchwork was very folk. Over the years, it’s been refined to a clean, almost pixilated look,” says Durfee. “Recently, I’ve been challenging myself in two ways: to incorporate different textures and painting techniques with the patchwork and also to return to my rougher roots. I’m now a bit more informed with my paint application and can approach the folk style at a new angle.”

Richmond, Virginia, collector Paul Houck agrees. “He’s come a long way just over the past two years, which tells me I can collect his work for the rest of my life—it will only continue evolving.” What hasn’t changed? The sense of levity in the artist’s pieces. “The tongue-in-cheek, slightly absurd humor in the art and titles are what first drew me to Durfee’s work,” says Houck.

Robert Lange Studios, which began representing Durfee in 2008, has shown three of his solo exhibits—which met critical acclaim and sold out almost immediately—in addition to collaborative and group exhibitions. He’s exhibited around the U.S. and sold pieces to people as far away as Germany and Japan, leading one to believe his imaginary world will keep expanding in a very real way.