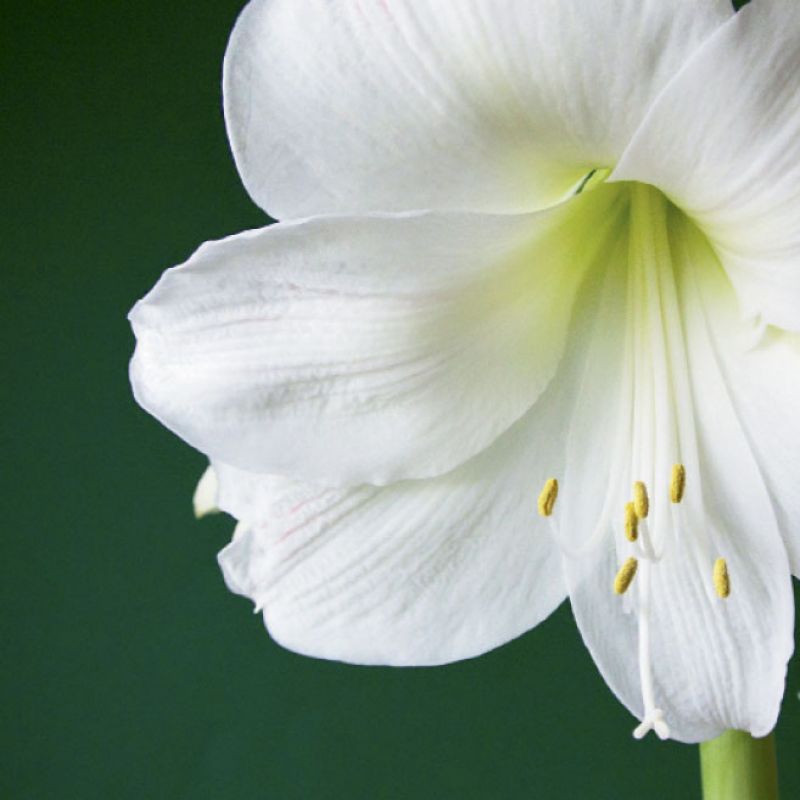 Looking to sub in a new bloom for the ubiquitous poinsettia this holiday season? Amaryllis, popular for their dramatic six- to 10-inch trumpet-shaped flowers, come in a spectrum of shades, from the deep scarlet ‘Red Lion’ to the snowy ‘White Christmas.’ The striped ‘Ambiance’ offers cream blossoms banded with pale pink for a candy-cane effect. A rapid growth rate produces blooms four to six weeks after planting. Follow these easy steps for potting now to enjoy festive flowers during the gift-giving season.

Select a pot about six to seven inches in diameter that offers good drainage. Fill it half full with moist potting soil and set the bulb on top of the soil. Add more soil around the bulb, leaving the top third of it exposed and half an inch between the soil line and the rim of the pot. This helps prevent water from running out of the container and leaves room for decorative Spanish moss. Place your plant in a sunny window and water sparingly to start, increasing once the bulb shows signs of growth and the soil feels dry. Rotate the pot to keep the stem upright as it grows toward the light.

When flowering has finished (about a month after the first blooms appear) cut the stalk near the top of the bulb, leaving the foliage to grow so it can restore nutrients to the bulb. Once the danger of frost has passed, it is safe to move the pot outside or to replant the bulb directly into a bed, where it will rebloom in the spring. To save the plant for future holiday seasons, you can leave it in its pot and imitate its natural environment, “forcing” it again next November—see sidebar for instructions.

❸ Water only when the soil is dry and the pot feels light in weight.

❹ Stop watering in early fall. The bulb will enter a dormant period, and the leaves will turn brown (you may remove them).

❺ Bring the pot indoors in early October. Store the potted bulb in a cool, dry, and dark location.

❻ After six to eight weeks, move the potted bulb out of storage and recharge the soil by removing its top half inch. Replace this with nutrient-rich soil.

❼ Water the pot once and place it in a sunny window. Do not water again until new growth appears. Once the bulb starts growing, water when the top of the soil is dry.

➑ Your bloom is on the way!

Splendor in the Grasses

Mark the seasons with ornamental grasses in a spectrum of shades