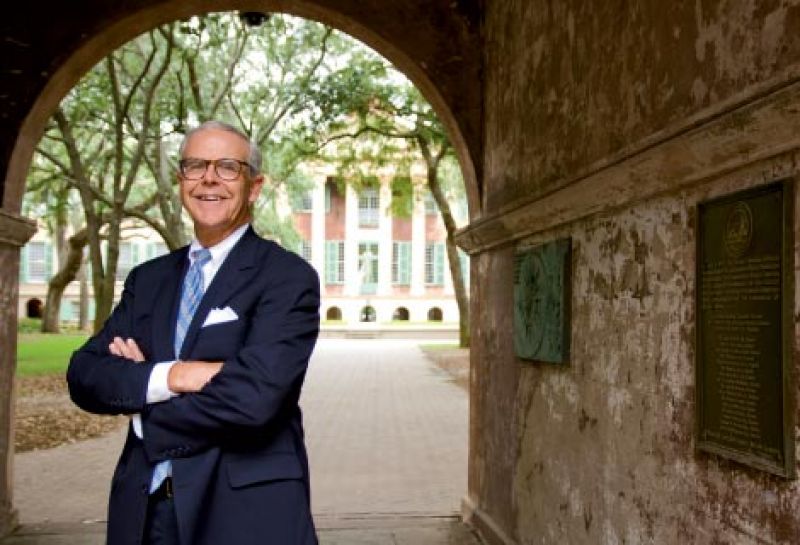 With their intertwining loops and twists, the coils of a sweetgrass basket form a beautiful yet functional piece of art. At its core is a bundle of strands—the often overlooked, sinewy support for the entire structure. Henry Blackford is like this hidden feature that quietly serves as a strong anchor. A man of conviction and connections, he has solidified the community and expanded the reach of Charleston’s charitable basket.

For 35-plus years, the senior vice president of First Citizens Bank has inspired service beyond his many talents, calling on community members to incorporate their strands of expertise, time, and funding. When Blackford calls on you, the conversations start with connections: family, college, or perhaps a dove hunt. Whatever the approach, the discussion circles around, like the coils of a sweetgrass basket, surrounding you with friends, family, and a sense of community. You are part of the Lowcountry, Blackford will say, and you need to be involved. He will say, “I am just a small town banker, but you, you are something…” and what will follow next will be why you need to help shape this artful vessel we call Charleston.

“Henry has said ‘yes’ to numerous organizations throughout the community, but he never just held a board seat or was just a name on the letterhead,” says longtime friend Walter G. Seinsheimer, Jr. “He has served with energy and total commitment while never seeking the limelight.” Exemplifying Blackford’s humble nature is his continued involvement in Trident United Way’s annual fundraising campaign. Although no longer the chair of the committee, Blackford is still actively involved with the initiative, meeting with local CEOs and encouraging them to invest in our community.

Not only is the depth of his service distinguished, his wide involvement in many nonprofit sectors differentiates him as well. Serving on the College of Charleston’s Foundation Board and Porter-Gaud School’s Board of Trustees, Blackford has invested in education, supplying immeasurable amounts of expertise and support. Seinsheimer recalls Blackford’s efforts at Porter-Gaud as chairman of the finance committee, where its guidance “was instrumental in helping the school consolidate debt, build a reserve fund for the physical plant, secure real estate crucial to its growth, and improve management of the school’s endowment.” Blackford has also exhibited thoughtful leadership in other sectors, serving as a board member of the Gibbes Museum of Art, Charleston Metro Chamber of Commerce, and Coastal Community Foundation.

Community-building is his passion and a recurring theme in his work. He has served on every committee at Coastal Community Foundation (CCF) and shaped the culture there by his self-effacing approach to bringing about involvement and community change. “He’s the kind of board member that all nonprofit executives seek,” says George Stevens, CCF president and CEO. “When the call goes out for a volunteer, his hand is always the first one up. He also prods us to think larger, more strategically, and reminds us that we should build upon where we’ve come.”

Janet Newham, senior vice president of the Charleston Metro Chamber of Commerce, recognizes the strength of Blackford’s quiet art of weaving community together. “Our region is in its enviable position today because of people like Henry, who give so much of themselves to assure that our region is as strong as it can be,” she says.
Not only does Blackford deserve to be recognized, he deserves to be recognized for doing his work without recognition. That is the high standard held by all Haven Award winners, past and present.

Existing for the Sake of Others: Named after a founding member of the Coastal Community Foundation, the Malcolm D. Haven Award for Selfless Community Giving serves to highlight a “doer” and a “mover,” an active and inspirational philanthropist who is unparalleled in radiating impact on the community.

In Good Company: As the 2012 selection, Blackford is the 27th recipient of the Haven Award.

High Praise: According to CCF regional VP Edie Blakeslee, Blackford “is tireless and unwavering in his dedication. He believes in making the world a better place and feels it’s his duty to help advance that goal.”

In His Own Words: “This is the nicest accolade of my career,” says Blackford. “People, such as Hugh Lane, Burt Schools, and Anita Zucker, were role models and inspired me to participate in community efforts. I’m grateful, not only to these exemplary leaders, but also to staff and volunteers of local nonprofits for allowing me to be a believer in our community and for making Charleston the special place that it is.”