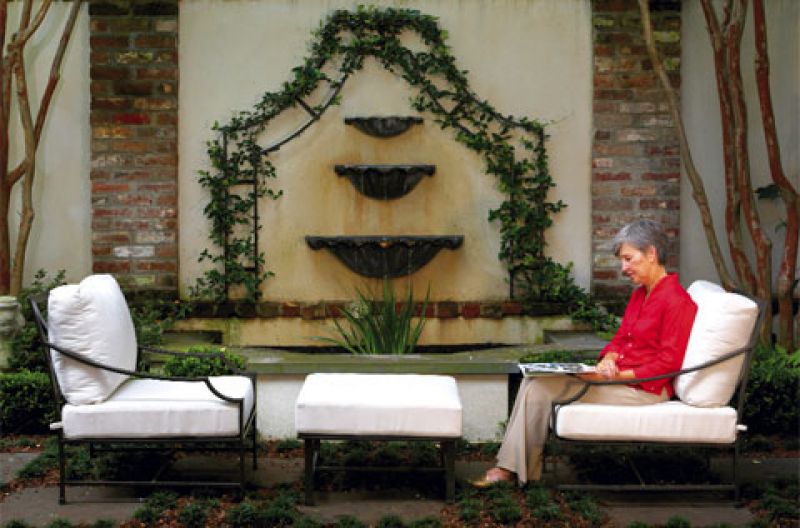 When Leslie and Dan Avant moved into their historic home at 63 Tradd Street, they knew that change was in the works for the property’s outdoor space. “I could see so much potential,” Leslie explains of the small garden that, unlike typical Charleston gardens, fronts the house rather than wraps around the side.

“We needed a garden that would not only look good year-round, but that would also stand up to grandchildren and dogs,” she adds with a laugh.

While the existing landscape had plenty of evergreens, the pair sought to further define the beds and give the illusion of more space, while raising one of the walls and adding a couple of fountains.

The Avants called on landscape designer Donna Cox, who had worked on the same garden years ago. “This time, I wanted to combine formal and informal elements to make it fun and easy to live in.”

So, Donna hatched an ambitious plan to reinvent the outdoor space by utilizing contrasts in shape and texture and creating a year-round look with a mix of shade-tolerant evergreens.

Situated near the corner of Tradd and Meeting streets, the Avants’ downtown home once served as the kitchen house to a residence nearby. Both structures were built by a Charleston merchant named William Harvey in the late 18th century, but only the kitchen house remains. Tucked away from the street and bordered by understated brick walls, the space is unlike its downtown counterparts for its position at the front of the property.

Today, visitors are greeted at the gate by the more formal aspects of the design, featuring a boxwood parterre and camellias around the central entrance path. With the vine-covered garage on the left, Donna and Leslie populated the beds to the right with hydrangeas and crape myrtles, creating a balanced display that subtly brings the full space into view.

Two fountains line the main walkway to the house, while a redbud tree overlooks the shaded interior. Varying heights and contrasts in light and shade define the arrangement and create the illusion of a much larger space.

Toward the house, the formality of the forward garden gives way to rambling ferns, offering a transition to the effortless, dressed-down presentation around the residence. At night, soft lights in various positions duplicate the contrast effect, maintaining the sensibility that is evident during sunlight hours.

From the Ground Up

Like most Charleston gardens, the project came with its own set of challenges. “Some parts of the soil are very acidic and other areas are very basic,” Donna explains. While a difficult PH balance comes as no surprise to anyone with a Lowcountry address, this one has the added obstacles of around-the-clock shade and centuries of leaching from historic stone and brick. Together, these factors can kill off all but the hardiest, and not necessarily prettiest, plants and flowers.

To overcome the shade and acidity concerns, Donna mixed stone design elements with carefully selected grasses in the shadiest areas bordering the house. She also employed a trade secret or two, including strict instructions to fertilize every single month, regardless of season. Her reasoning? “The fertilizer is leached out faster than anyone realizes. The extra treatment helps the plants do better in a drought and keeps the azaleas from dropping their leaves in the winter.”

With this feeding cycle in place, Donna started rearranging, replanting, and introducing new design pieces and organic elements to the property. Within months, the garden began to take on a new shape and character, revealing the potential that Dan and Leslie saw from the beginning.

Though the resulting landscape has been featured on the Historic Charleston Foundation’s tours for several years, it’s been known to invite attention from those without a tour pass as well. Dan once returned home to find Leslie in the garden, camera in hand, preparing to take a portrait for a young couple he didn’t recognize. Leslie later explained that she had left the gate open for a moment, and the passersby had politely asked to be photographed in the garden. Flattered and amused, she was happy to oblige.

“I really don’t have plans to change anything,” Leslie says when asked about any new developments for the uncommon downtown space. “I like it how it is. We’ll move a planter every now and then, but we’re happy with what we have.”