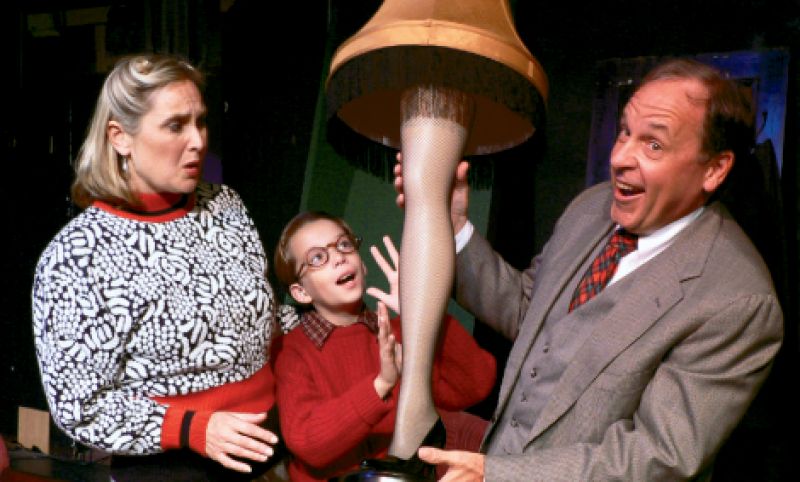 Sure, it’s a time of joy, peace, and goodwill towards man, but anyone with relatives knows Christmas isn’t complete without a little family disenchantment. Which makes December the most wonderful time of year to visit local theaters for quirky holiday plays that will leave you holly jolly for all of the warmth, laughter, and dysfunction of the season.

Returning after a hiatus last year, the Village Playhouse’s A Christmas Story adds local charm to the 1940s all-American saga of the Parker family and young Ralphie’s hilarious quest for a Red Ryder BB gun. Spotlighting hometown celebs Angela White and Robbie Thomas as Mrs. Parker and the narrator, the show also stages a talented cast of 10 child performers. For nostalgic parents who grew up singing “Fa rah rah rah rah,” this family-friendly play offers the perfect way to give children a new tradition in a magical package of live performance.

The 201-year-old Dock Street Theatre is also hauling out the holly for its first Christmas since the recent $19-million renovation. And the Charleston Stage elves know just how to make loyal patrons smile. Based on Barbara Robinson’s beloved children’s story, The Best Christmas Pageant Ever tells a hysterical, heartwarming tale that explores the true meaning of the season through the eyes of the unruly Herdman children, “the worst kids in town.” Directed by Marybeth Clark, this adaptation showcases the 20-member Youth Performance Troupe, most of whom recently read the book in school.

And speaking of naughty characters, with the world premiere of A Waffle Haus Christmas, PURE Theatre puts forth a dysfunctional cast of honky-tonk folk that’ll make your seasonal stress melt away faster than a South Carolina snow. Written by the group’s own Rodney Lee Rogers, the play is touted as a cross between A Christmas Carol and Jerry Springer and, like the latter, is best suited for teen and adult audiences. An extended version of Rogers’ 2007 laugh-out-loud one-act show, the story cooks up a flapjack of Christmas past, present, and future from the perspective of a burned-out waitress, her line cook ex-husband, and their flighty daughter. “The short play was a big success,” says Rogers. “It’s a familiar story. We all know these Waffle House characters: they’re a bit country, but they’ve got a lot of heart.”

And no matter how much craziness Christmas gatherings may bring, the holiday really is all about heart. So take a break from the rush this month and add one of these shows to your calendar. With an evening of live, local theater, you can have yourself a merry little Holy City Christmas. ­­