Community Catalyst, Christine Osborne
November 2013
Fostering children’s ideas and actions to give back 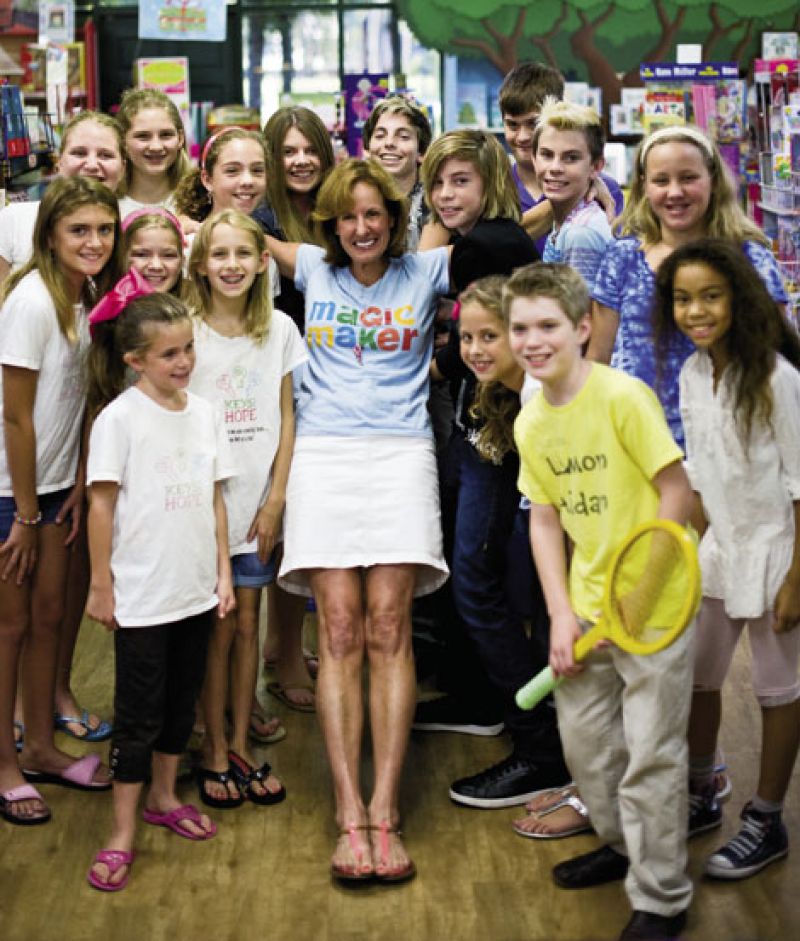 Imagine a place where the answer is always ‘yes.’ Imagine a person who makes you feel important and vital. Imagine believing that you can do anything. Sounds like a fairy tale, right? It isn’t for local children and parents who want to help our community. They’ve found the place in Wonder Works, and the person in its magic operator-in-chief, Christine Osborne, who enthusiastically encourages them that they can make a difference.

Osborne supports charities founded by area kids—such as Abby’s Friends and Keys for Hope—by providing them with a platform along with personal guidance so they can “take the voice inside their heart and make it reality,” as she likes to say. “It’s all about bringing out the community’s passion,” the former occupational therapist adds. “You think it, you do it, and the magic happens.”

Osborne catalyzes these budding philanthropists with advice, encouragement, and retail space in her four stores and at special events—such as Elfstravaganza (November 9, 2013) and Kids Run & Wonderfest (April 4, 2014), but she’s also the first one to pick up the phone with an idea, a connection, or a donation.

“Wonder Works is just that. Wonder that works,” says Jamie Drolet, whose late daughter, Harper, worked with Osborne on her cause, Hugs for Harper. The effort began in 2010 when Drolet, a young girl fighting rhabdomyosarcoma at MUSC Children’s Hospital, took it upon herself to supply enough toys for each child faced with a hospital stay and went to Wonder Works with an appeal for help. In response, Osborne contacted her vendors and helped Harper stock MUSC’s Happy Wheels cart with more than 10,000 toys; the store continues to support Harper’s endowment fund and collect donated toys for Happy Wheels in her honor.

Sheri Pilley—a local mom who helped her daughter, Clara, and her friends found the nonprofit Keys for Hope in September 2011—receives a call from Osborne at least once a week. The group of 10- to 12-year-old girls (Pilley, Sophie Estoppey, Emily Hearn, Ellie Shuck, and Emma Grace Spach) takes donations for keys they’ve decorated to raise money for Crisis Ministries. “Christine stokes the fire for our girls, complimenting them on their hard work and keeping us updated on how many keys have sold each week,” Pilley says. “She’s always looking for new and better ideas to keep things moving. Whether it’s money, time, effort, or encouragement, Christine really looks out for us.”

MAGIC TOUCH
Abby’s Friends: Wonder Works promotes and sponsors events for Abby’s Friends, a nonprofit created by 11-year-old Abigail Sutterlin to raise money for juvenile diabetes.
Keys for Hope: Osborne’s stores sell the nonprofit’s decorated key chains and necklaces for $5 with 100 percent of the proceeds benefitting Crisis Ministries. They have raised more than $40,000 for the city’s homeless.
Kelsey’s Closet: Wonder Works collects gently used clothing for this nonprofit started by 11-year-old Madisyn Hostetler. All of the clothing goes to East Cooper Community Outreach.