At Ease on Sullivan’s
January 2013
WRITER:
ellen mcgauley
PHOTOGRAPHER:
Peter Frank Edwards
Jenny Sanford snaps up and streamlines an old beach cottage for the next chapter of just-right island life with her boys 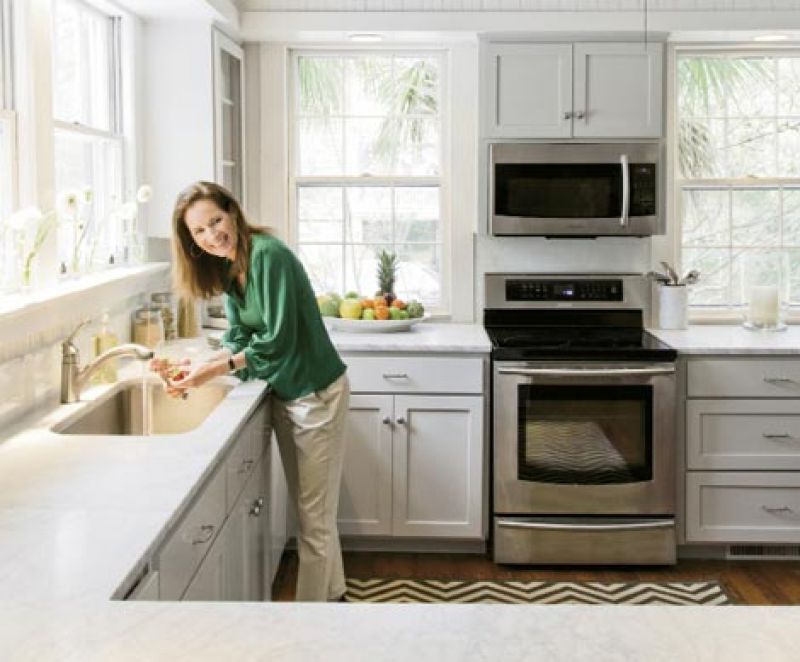 Jenny Sanford knows a thing or two about staying grounded. During her seven years in the Governor’s Mansion, the state’s then-First Lady would commandeer the cavernous, industrial kitchen for a little cookie-baking with her boys—“or try, anyway,” she laughs, noting the oversized vats of flour and sugar, the larger-than-life mixing bowls. She doesn’t flinch at rattlesnake skins airing out on her front porch (courtesy of four sons with a penchant for trekking through the outdoors), and her former 4,400-square-foot front-beach home has seen its share of bumps and bruises."

“The entire bottom floor, which was campaign headquarters for a while, was like an old garage,” she says. “It was the playroom, game room, place to hang flags and hunting gear—the boys could make it their own.”

So when she decided to put the house up for sale in favor of a little downsizing (her two eldest, Marshall, 20, and Landon, 19, are off at school now; Bolton, 16, and Blake, 14, are at home), continuity for her sons was priority one. “When you move as a family, you have to think of everyone, and I didn’t want to uproot us to a new community or redo everything we have. We’d already been through a lot of change,” she says. “This move was about finding a house with enough space for everyone, but comfortable enough to live in by myself when the boys aren’t here.”

Jenny looked at dozens of listings on the island, until she came upon an old yellow cottage two blocks off the beach. It had a broad, screened-in porch to catch the salt air on the ocean side (and wrapped a second side); big windows to send sun streaming into first-floor rooms; original wood floors; sky-high ceilings; and a backyard that stretched the length of the block.

And like Jenny, the house had a history on the island. Built around 1915, the craftsman-style beach house sits on a part of Sullivan’s formerly known as Atlanticville (just east of Middle Street, stretching from stations 22½ to 26). Sometime after the 1987 survey, previous owners added a second story, and with it, enough bedrooms for Jenny’s houseful of boys and a tip-top, open-air porch with a view of the ocean.

There was a lot to love, and in August of last year, she scooped it up. But for this to work for Jenny’s family, the bones were only half of it. “It had to feel like us, to reflect who we are,” she adds.

“Nathalie didn’t try to get me to start over; instead, she got to know me and how we live by coming over to the old house and looking through our things,” says Jenny. After that, the two made a list of what Jenny would keep and what she would give away, planting sticky notes on everything to keep it all straight.

One thing the stylist did right off the bat was integrate the boys’ treasures into the décor. “In the old house, that downstairs playroom kept the boys separate, and Jenny wanted to center the family a bit more,” says Nathalie, who, for instance, took a pair of mounted deer heads—formerly headlining an outdoorsy, flags-and-hunting gear display in the all-boys quarters—and hung them on either side of the fireplace.

“Rather than tucking them away as ‘boys’ stuff,’ Nathalie was able to see them out in the open, on either side of my Le Pho painting,” Jenny says.

For her, it was like a lightbulb going off. “Nathalie wouldn’t pick something up and say, whose is this?’ Instead, she’d say, ‘Let’s try this here.’ Nathalie knew how to create an atmosphere of who we are.”

That, Jenny insists, isn’t something that changes from one house to the next. Here, the boys rinse surfboards out in the drive, chat with their mom over the bar in the kitchen, host a half-dozen friends at a time, and shoot their compound bows in the backyard. “This house is about being comfortable again,” says Jenny. “We’re regrounded here. This island is home.”

Want to MakeOver Without Starting Over?
Stylist Nathalie Naylor’s tips for freshening up your rooms:

❶ Paint is the quickest and cheapest route to an all-over update. “I recommend choosing a small palette of complementary neutral tones,” says Nathalie. “Our collections don’t always go together, but against a neutral backdrop, they can begin to blend.”
❷ If a piece doesn’t mean anything to you, donate it to Habitat for
Humanity or another charity. Be realistic in what you will repair or update, and get
rid of items that have no aesthetic or emotional value.
❸ Purchase only what you love and what makes sense with your life. “Just be honest about how you live,” she adds.
❹ Factor in texture. Mix shag with smooth, shiny with earthy woods. This
“unflattens” rooms and makes them more visually interesting.
❺ Enlist the help of a friend to look at your rooms with fresh eyes. He or she will be able to see things your eyes have gotten used to and offer new ideas. 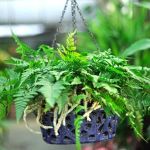 Feeling cooped up? Don’t despair. Bring the outdoors in with these easy-to-grow ferns. And they’ll transfer nicely to your yard come spring 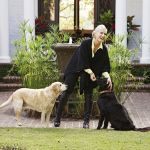 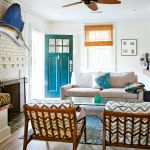 A young builder takes on his own Riverland Terrace cottage with a one-man, room-by-room rehab 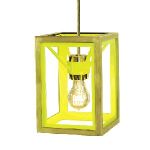