After selling her dream home on the banks of the Ashley River, interior designer Melissa Lenox had a second chance to build an even better family residence next door

After selling her dream home on the banks of the Ashley River, interior designer Melissa Lenox had a second chance to build an even better family residence next door
August 2022
WRITER:
Jennifer Pattison Tuohy
PHOTOGRAPHER:
Katie Charlotte 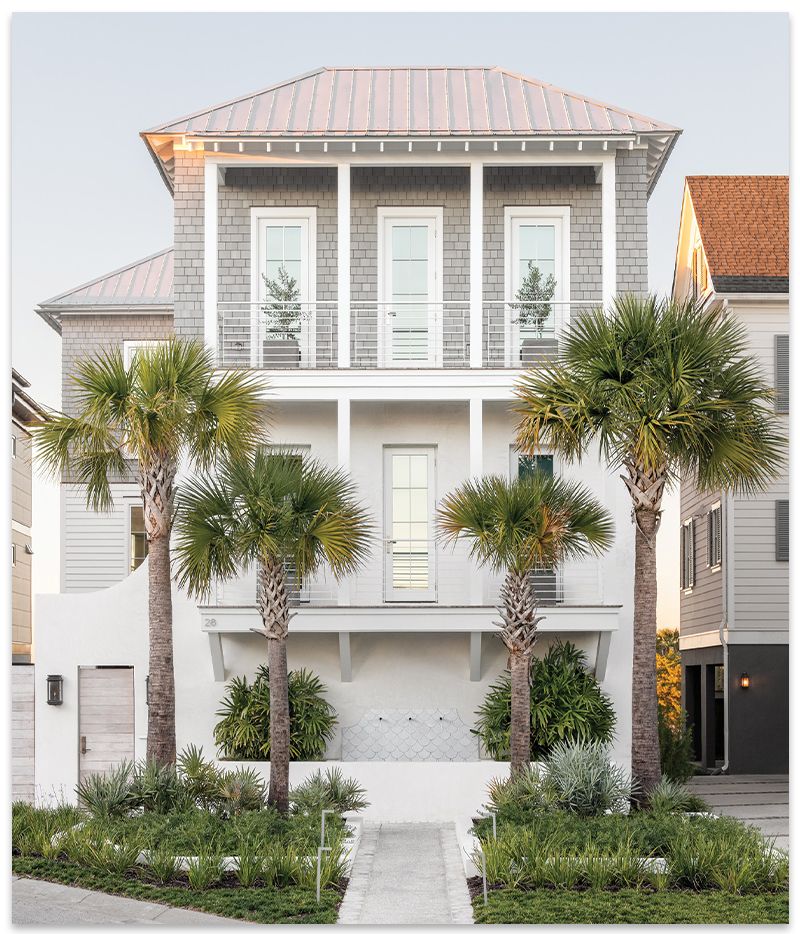 For a couple whose love story involves a cross-country romance and a dizzying amount of globe-trotting to satiate their shared wanderlust, one place keeps them grounded: Lowndes Pointe. This downtown neighborhood on the banks of the Ashley River is where Melissa Lenox and her husband, Brad Davis, built their dream home in 2014, having first met while she was still living in San Francisco. Today, Charleston is home.

“I just love it,” says Melissa of the secluded spot tucked away in the upper corner of the Wagener Terrace neighborhood. “It’s close to everything but a little bit removed. I love the water, the birds, the dolphins, and it’s just really quiet.” The couple’s first home in the small subdivision with 31 lots scattered around a cul-de-sac was on one of the best-situated, with a private dock and 180-degree views of the river and surrounding marsh. Then, someone made them an offer they couldn’t refuse.

“We had no plans to sell whatsoever,” Melissa says. With all the undeveloped lots in Lowndes Pointe spoken for, the couple was extremely hesitant to even consider selling. “We didn’t want to leave the neighborhood.” But the prospective buyers were persistent, and as an interior designer (her) and real estate developer (him) who had built spec homes together, they had ample experience to lean on. “We talked to a neighbor who had a large side yard and asked if we could buy it to build another house,” says Melissa. 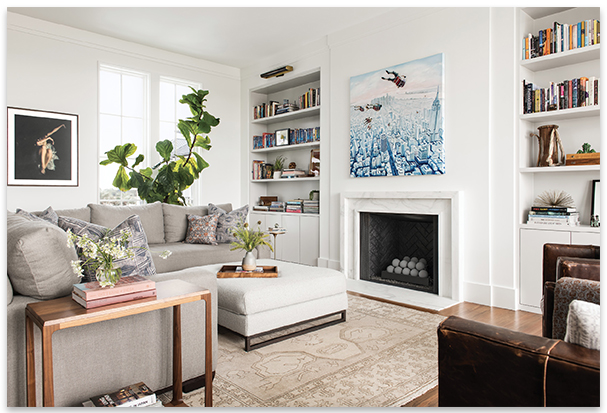 LAID-BACK LIVING: The layout of the main living space is almost identical to their previous house, taking full advantage of the gorgeous sunset views over the Ashley River. Melissa kept the sofa and leather chairs and added a custom-designed Calacatta marble fireplace surround, complemented by artwork the couple acquired in Germany.

The neighbor agreed to sell what was the smallest lot in the development at 45 feet wide by 115 deep. And so began a bizarre game of musical houses, whereby Melissa and Brad sold their home, bought the buyers’ house in nearby Longborough, and moved there while they built their dream home—again. It was a surprisingly speedy process: the property sold in September 2017, and by early 2020, the couple moved into their newly built house, three doors down from the first. “None of this was in the plan,” says Melissa. “I had very mixed emotions about it all. But I am so happy we did it.”

So, how does an interior designer improve upon a house she had spent two years designing as the ideal space to begin a new life with her husband and his then-eight-year-old twins? “That was the fear!” she says with a laugh. “How do we top the last house?” Her approach was to create an entirely different style inside and out while keeping the basic structure that had worked so well for her family.

Other than a few logistical changes, including adding a storeroom for Melissa’s interior design firm, the living spaces stayed largely the same. Working again with architect Phil Clarke of Clarke Design Group and builder Jay Madigan, they made the open-plan living/dining/kitchen area the home’s centerpiece, orienting to the northwest to allow natural light to flow through floor-to-ceiling windows. Melissa’s office; a family room/guest room; and pool, deck, and outdoor bar round out the main floor, with the primary bedroom, gym, laundry room, and bedrooms for Amelia and Cole (now both 16) completing the second floor.

The family room was a new addition; they chose to turn the fourth bedroom into a media room they dubbed “the snug.” The cozy space at the front of the house has a built-in king-size bed with a bunk over the top facing a flat-screen TV encased in a custom-built media center. “We pile in there and watch movies,” says Melissa. “The dogs love it. The kids love it. It’s so nice to just cuddle up there on a rainy day.”

Lenox retained the modern style of the first home but went for a lighter, more relaxed look. “That house had a ton of black, and it was grittier,” she says. “This one’s very soft and ‘froofy.’” Melissa infused the home with a palette of pale grays, soft whites, and warm woods, choosing old-growth pine floors, Brazilian wood dining chairs from Sossego, and soft leathers and durable fabrics for the furnishings, all highlighted by gold and brass accents. Pops of pale blues, purples, and pinks add color, while an array of accent rugs and floor and wall tiles, including hand-painted terracotta in the laundry room, provide pattern. “I wanted it to be really light and airy as opposed to our old house, which was full of stark contrast,” explains Melissa. 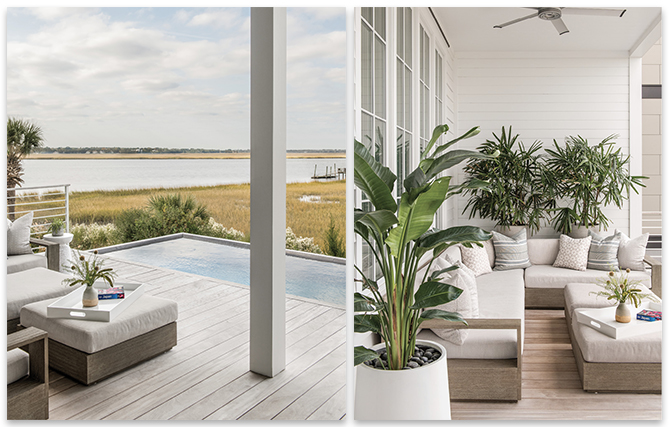 OUTDOOR OASIS: The main outdoor deck features a pool, installed by Aqua Blue, and an Ipe wood deck furnished with an outdoor sectional in a rugged Perennials fabric, accessorized with Clay McLaurin throw pillows. Melissa and Brad love to watch dolphins and their babies frolic in the river while soaking up the sunsets over the Ashley.

The kitchen, in particular, illustrates the change in style. Here, she swapped a black paneled island with stainless steel stools for one painted in Farrow & Ball’s “Down Pipe” complemented by wood seating and topped with Calacatta marble. Instead of stark white cabinetry with silver accents, she selected a softer, cream color with white bronze hardware. Melissa also opted for paneling the refrigerator and oven hood, creating smoother lines. Floating walnut shelves over vertical handmade clay tiles from Heath Ceramics add interest. While the home feels modern, it has a distinctly hygge vibe, a Scandinavian style with an emphasis on coziness and conviviality. “There was so much minimalism for a long time; now I feel like everything’s going back to more chintz and pattern,” says Lenox. “Lots of bright colors and painted trim.”

For the overall contemporary coastal look, the couple was inspired by Alys Beach, a new urban community in the Florida panhandle, where the Bermudan-style architecture is influenced by the small villages that dot the coast of the Mediterranean. A two-toned exterior features gray shake siding above smooth white stucco, topped by a metal roof. Instead of a wide exterior staircase, a private courtyard leads to an enclosed staircase at the side of the house. Combined with a fountain and a curved architectural feature over the front door, the home has a distinctive style that’s both classic and contemporary.

“Everyone told us, ‘Don’t move. You’ll regret it.’ But we love it here. And I love the design,” says Melissa. “It’s more what I want for the long term. I thought about that a lot more with this house, being here for a long time.” For the couple who have traveled the world together, the perfect place on earth is swinging together in a hammock on the porch of their Charleston home. 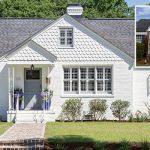 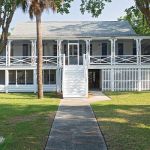 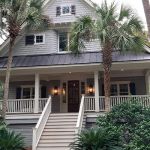 The space serves as a satellite office and work showpiece, and a relaxing coastal retreat