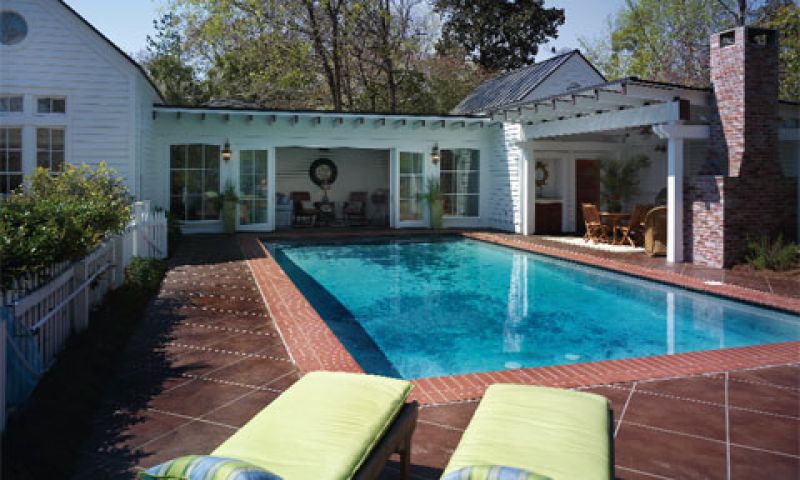 I remember riding my bicycle to Guerin’s after school for ice cream and sodas,” says Summerville native Lisa Thomas of the less than one-mile stretch of small town that she knows well. After all, it serves as backdrop to both the historic home where she spent her childhood and the recently rehabbed residence she now shares with her husband and two children on Main Street. “Now my kids can play in the same neighborhood and ride their bicycles up there like I did.” It was a craving for this family-centered sensibility that led Lisa and her husband Milton back to her hometown after four years in downtown Charleston and West Ashley, and to the circa-1920 fixer-upper they purchased. “There was actually a small tree growing through the front steps,” laughs Milton, recalling the overgrown, under-appreciated condition in which they found the house. Lisa laughs. “When we looked at it for the first time, the pool was full of mud and animals and you could hear a swoosh of frogs jumping as you walked by.” Despite its condition, the pool was a well-used fixture of Summerville past. “Several of my parents’ friends have said they learned to swim here. It might be the oldest in-ground swimming pool in Summerville,” says Lisa. Over the next eight years, the Thomases set about a renovation that included rebuilding the decades-old pool, yet focused much of their attention on the main house, where they expanded the living room and kitchen, among other things. It wasn’t until a couple of years ago, after their children were older, that they tackled the rest of the backyard—specifically, the old, unsightly outbuilding parked behind the pool. “The building is the original pump house that served water to the residence,” explains Milton of the utilitarian structure that had been there since the house was built. “It had a deep well that took a crane to remove.” This was just one of the heavy-duty challenges on tap to turn the out-of-use, tin-roofed shed into something the family could enjoy. “Lisa and Milton’s children were reaching high school age and they knew the kids would need some independence,” says interior designer Merrie McNair, who helped outfit the interior of the rehabbed structure. “A sunny cabana was an ideal place for them to hang out with friends and still be supervised.” Though Mount Pleasant-based firm Stubbs Muldrow Herin Architects would redesign the building, “they faced several challenges in dealing with the old structure,” says Lisa; so rather than simply razing it, Summerville’s Board of Architectural Review had them redo it in three stages and call the project a renovation. Hence, the team worked from left to right, tearing down a third of the building at a time, and rebuilt it in keeping with the exterior style of the residence. They added height to each of two wings to mimic the house’s A-lined overhangs and opted for white wood siding and a dark tin roof. The team treated the new structure to a kitchen, outdoor cooking and dining area, steam shower and sauna, and a bedroom with a vaulted ceiling and exposed rough-hewn timbers. Inside, McNair worked with Lisa to furnish the cabana comfortably, with a decidedly island slant. A palette of blues, browns, and greens brings pool hues and outdoor colors into the living area. The sitting room was made kid-friendly with slipcovered furniture, while rotating seating can face the expansive sliding doors to create an open entertainment area. “We’ve done some traveling to the Bahamas, and were really looking to bring elements of that style back home,” says Lisa. “It’s actually very practical—the kids invite friends over and I can look out of any of the windows on the back of the house and check in on them. And that’s what we wanted: a place the family likes to be.”