Crafted for the Past, & Future 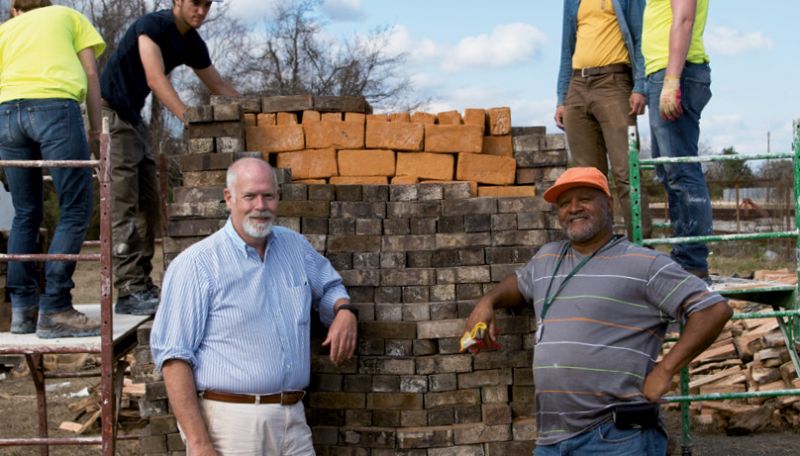 It all began, as many enterprises do, with a brick. But for Southwick “Cary” Briggs II, it was the absence of that basic building block that grew an idea into a transnational partnership and that partnership into a program leading local folks to brighter futures.

Just three years ago, Briggs was living in Kentucky, a history buff helping to raise funds for Philadelphia’s Fort Mifflin with a memorial pathway—the kind made of bricks bearing donors’ names. “I wanted to use authentic-looking Colonial bricks,” he says. Before the Victorian Era, bricks were handmade in an arduous process that ended with wood firing. “In an updraft kiln, smoke and pot ash travel through the bricks, leaving unique streaks,” notes Briggs. While the brick-makers in Colonial Williamsburg’s Historic Trades program were using the old techniques, they weren’t doing so on a commercial scale—no one was in the United States.

However, Colonial Williamsburg craftsmen had taught British business H.G. Matthews to wood-fire bricks for buildings such as the Royal Palaces. Briggs contacted them, and ultimately, “they asked me to start a company that would import their products to the U.S.,” he says. He agreed with one condition: that Colonial Williamsburg come back on board to lend their expertise on early American bricks.

Briggs also sought input from Charleston’s American College of the Building Arts (ACBA). Its president, Lt. Gen. Colby Broadwater III, said, “You need to move here and start a brickyard. We’ll help you.” So Briggs did. And Broadwater did, even inviting the infant Tidewater Brick Co. to set up shop on campus, then the Old City Jail, in January 2016.

Briggs would join H.G. Matthews in making “Colonial Williamsburg Bricks” (for which Tidewater is the exclusive distributor and U.S. manufacturer). But first, he had to find manpower—it was that quest that led to his second endeavor. “There were people who wanted work but didn’t have skills or ‘employability,’” says Briggs. In other words, they needed to learn to “butter a brick” and figure up fractions, but also to practice good on-the-job behaviors.

With grants and assistance from organizations including Education 2 Employment and SC Works, Briggs created a 10-week pre-apprenticeship program free to Charleston County residents. Taught by Alton Staley, a third-generation mason and ACBA masonry professor, nearly a dozen men and women have graduated since May. Briggs helps each get “masonry support” jobs. “They’re making good wages and can work toward becoming bricklayers, if they choose,” he explains.

Last fall, Tidewater moved to Greg Mathis Charter High School’s North Charleston campus, where they’re offering a class to seniors who aim to move into the pre-apprentice program. “And we’re designing a pilot program with YouthBuild in Atlanta,” notes a proud Briggs.

As for the business side of things? International manufacturer and supplier Meridian just began selling Colonial Williamsburg Bricks, which have made their way into buildings like James Madison’s Montpelier. Tidewater is helping to rebuild the past while shaping the future, indeed.